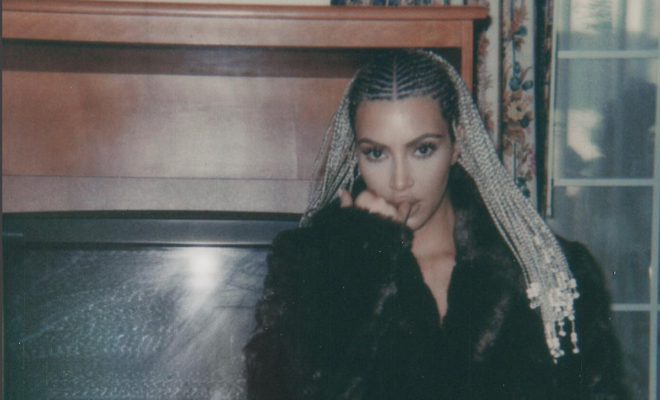 Kim Kardashian has perhaps the most followed profile on Instagram. As of February 1, 2018, it has nearly 107 million followers. She has shared 4 thousand pics and has been the face of 118 publications.

Last Tuesday, the media darling published a series of 6 photos on Instagram that still has the internet buzzing.

Kim Kardashian who initially, rose to fame after video surfaced on the web of he having sex with her then boyfriend, singer Ray J. The video was presumed to be recorded in 2003 and made public in 2006. since then Kim has remained reverent to her core with similiar media stunts.

This time around the curvaceous Kardashian tried sensual nude poses which premiered braided hairstyle, Where she trades in her blond lace wig for afro- styled braids which have many critics assert accusation of culturally appropriating an African-American curtail hairstyle.

In the words, of  Actress and Disney starlet Zendaya “Braids are not new,” which she stated during an interview in 2016, when asked about Kardashian West’s little sister Kylie Jenner, who, at the time, was receiving similar backlash and criticism for her  cornrow-infused selfies on social media. “Black women have been wearing braids for a very long time. It became new and fresh and fun, because it was on someone else other than a black woman.”

Actress Amandla Stenberg sentiment    which she expressed in a video released in early 2015 entitled Don’t Cash Crop on My Cornrows, outlining the historical elements involved in  cultural appropriation within the entertainment industry and its effect on the way society views black hair. 15  year old Stenberg points out the complexity of the subject.   Where often cultural elements are copied from a minority culture only to be repackaged by the dominant culture as something new and fresh.. Stenberg ends by asking the oft-tweeted question: “What would America be like if we loved black people as much as we love black culture?”