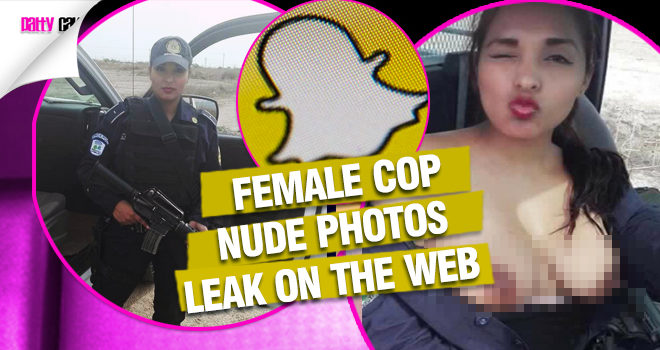 Nidia Garcia, police officer of Nuevo Leon,  has been suspended after topless photos of  leak of her on social networks.

In the pictures you can see Garcia posing topless in a suggestive way aboard a patrol car while holding an assault rifle.

She has now revealed that the then famous topless photo was taken by her male
patrol partner during  which she referred to as a “funny game” the pair were playing.

“My patrol partner is like a brother to me. I’m not having an affair with him,
or anyone else, we simply took the photos as a laugh,” she insisted.

Nadia claims the photos begin to emerge publicly after her phone was misplaced and she begin to was
blackmailed by a mystery person she believes works with her in the police department.

The party contacted her demanding she sleep with them or they’d leak the topless
image.

When she refused to do so the photo appeared online.

In a Facebook confession after the photo went viral, Nidia had admitted to
posing for the snap – but denied uploading it to the web.

“I apologise to the Proximity Justice Secretariat [local police force] and moreover to the city of Escobedo for this immoral act that I have
committed,”she wrote on Facebook.

“Since I would be incapable of uploading a photo like this, I am outraged
by the great damage this publication brings to my two daughters, my husband,
parents, brothers and entire family.

“I hereby admit my great fault in posing for the picture, and I ask for
this topic to be left aside.

In the wake of the confession several photos started to surface– including
topless images – which have already been widely shared on social media.

She has now been offered modelling contract from several men’s publications, saying that they want to capitalise on her
instant popularity.