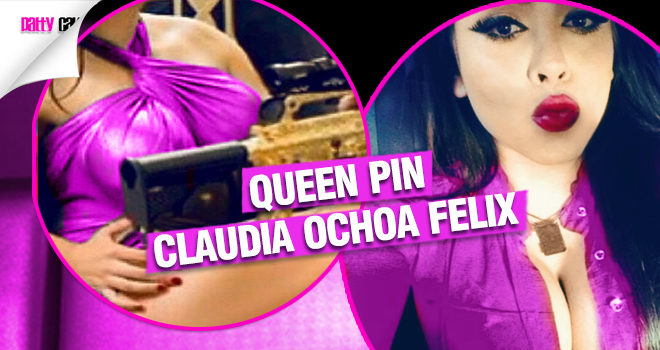 Claudia Ochoa Felix is known best on social media for her curvaceous figure, pouting lips in her selfies and batting eyelashes but she is also allegedly head of the world’s most ruthless gang of killers on earth.

As a young mother with glamorous model like looks, sexy figure and “Cakez” that are “busting out the bando”, the simi­­lar­­ities between her reality and fashion queen Kim Kardashian are uncanny.

Claudia Ochoa Felix even lives millionaire life 10 times over with an estimated worth of nearly 200 million dollars.  Armed with bodyguards,

unlike the her US doppelganger Kim Kardashian this siren armed security is not to protect her from the occasional over-zealous fans… but from hired assassins and CIA Operatives .

The Mexican gang is known to US intelligence as “the world’s most powerful drug trafficking organisation”, its hitmen feared as the planet’s deadliest people.

Over the last couple of years Claudia’s cartel has been linked to three frozen bodies hung from a bridge, eight people shot playing volleyball and a gun battle with rivals which left 30 people dead.

After well known boss of the  Los Ántrax cartel  “Jose Rodrigo Arechiga Gamboa – known as El Chino – was arrested, his social media -loving girlfriend Claudia allegedly is said to have been appointed as the new chief.

Before becoming chief the bombshell then every move had been displayed on social media sites where she regularly posted pictures of herself in stilettos, caressing her custom-made pink AK-47 and AR-15 automatic rifles, posed amongst armed masked men holding M16 assault rifle aside her curvaceous figure.

Claudia also know as the Empress of Los Ántrax, portrayal of a life of narcotics and narcissism undercut her emphatic denial that she is La Emperatriz de Los Ántrax

Known to the public as the Mexican cartel’s Kim Kardashian, the mother-of-three gained notoriety after it was wrongly reported she had been tortured and assassinated. The victim was, not Felix but infact, Yurina Castillo Torres, a former girlfriend of Gamboa family who had a striking resemblance  to Claudia. Despite Felix’s insistence that she is just a devoted mother of three, Claudia left little time to capitalising on the reports from media by raising her notoriety overnight with a slew of  incriminating photos over the web showcasing her lavish cartel lifestyle.

But as news surfaced of her rise to power in the cartel she quickly removed much of the photos that could place her in custody and linking her to Los Ántrax. She opted to instead create a new Facebook page adding that she had done so “to clarify all your doubts so as also to answer your questions… the only thing I ask is you to be respectful!” she wrote.

Removed were the pictures she had revelled guns and money and armed body guards and million dollar sports cars and replace with photos of a loving mother devoted to her two young sons children and her “princesita” daughter.

However, the images of her past has been shared thousand of times over the web. Pictures showing her AK-47 on the red leather seats of a BMW Series 3, the skull symbol of Los Antrax painted in black on the ammunition clip and another of one of her young sons lying on a bed covered in millions of dollar in cash. Felix is even seen posing with members of a folk band which composed a ballad to Los Ántrax. In one photo the 27-year-old is even seen holding a grenade launcher while warning: “Watch your step, friend!”

Claudia is also spotted in images countless times posted by young members of the Sinaloa cartel. One intelligence source said: “Felix claims she is just a regular mum but how many mothers have custom-made guns?

“She has access to astronomical wealth but has never worked a day nor come from a family with money. None of her former boyfriends have either.”

The father of her children is reported to be feared cartel lieutenant El Chavo Felix. However the two split and Claudia moved on to find love with another gang member Dorian Trinidad Leon Angulo. He later died in a car
crash – shortly after escaping jail – in 2011 while Claudia sat by his side.

She survived and again had her eyes set inside the cartel, becoming involved with El Chino who, according to reports, she married. Known to the underworld as deadly heartthrob and the gang’s top enforcer. His main roles were to oversee its armed squadron and protect Sinaloa’s top brass, which included the leader of the cartel, El Chapo (Shorty) Guzman, who is currently under arrest in Mexico.

Like Claudia, El Chino passion of flashing incriminating photos over  social media, showing ill-gotten sports cars, yachts and guns. Away from the internet he was busy ensuring the Sinaloa cartel remained the most powerful gang in the world.

Since 2006, Mexico has laid claim to over a 100,00 lives being lost in what has been since dubbed as the “bloody war” the war between raging drug gangs. Anyone who threatens to stand in Sinaloa’s way is immediately killed, with El Chino accused of being personally responsible for a multitude of murders, including the killings of the three hung from a bridge in 2011.

The deaths were executed out of revenge after a Sinaloa leader was murdered in a war with the rival Beltran Leyva cartel.

Countless victims have been killed by the gang’s trademark chainsaw beheading. Several folk songs, known as narcocorridos, mention El Chino Antrax as an elegant and fit man with a taste for the high life – and extreme violence. His nickname, El Chino, is said to have been coined as he looks to some as though he has Chinese ancestry.

On his Twitter and Instagram posts he would often blur his face, while caressing automatic weapons and posing with scantily clad girls.

Other photos of Claudia alleged husband El Chino show him flashy pics of show cars, boats, helicopters and expensive jewellery. Perhaps his most famous photo is one where he was seen with Paris Hilton. According to a report, he photo-bombed the US socialite while she gave a TV interview. However US authorities used his addiction to the web to build a case against him and in December he was arrested in Amsterdam. The following months a Dutch court approved extradition to the US where he is wanted on drug charges.

America quickly moved to seize the wealth he flaunted online. Wanting to maintain his power base, El Chino apparently ensured that his wife became his successor. Claudia strenuously denies taking up his reins but she is now a target for rivals and assassins. Nearly 2 years ago gunmen grabbed Castillo Torres as she left a gym believing her to be Claudia. She was tortured, hanged and her body dumped behind a school yard.

And news of Claudia’s alleged “appointment” led to a frenzy of activity on her media sites. She soon accumulated more than 100,000 followers.

Despite the multiple kidnap and assassination attempts, Claudia refuses to quit her million dollar champagne lifestyle and is often seen in the clubs of Mazatlan, Culiacan and Guadalajara.

But now she is always surrounded by armed men.