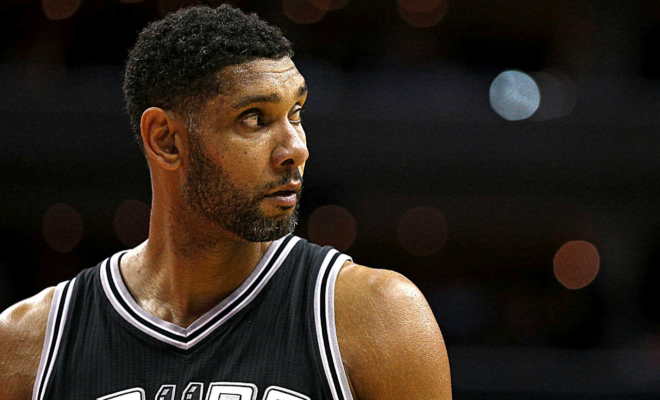 Tim Duncan calls it quits after an impressives 19 season grabbing 5 titles along the way. Infact he’s manage to make it to the playoffs every single season of his 19 year career. That alone puts him in a league of his own. With such a long history in the playoffs, it’s inevitable that his career would end near the top of some very prestigious NBA postseason records.
Here are the stats that defined the 15-time All-Star known as the “Big Fundamental.”

15: All-NBA selections, tied for most all-time. His 15 NBA All-Defensive Team honors is the most ever.

67-15: Spurs record this season, the best in franchise history.

126: Postseason wins for the trio of Duncan, Tony Parker and Manu Ginobili.

157: Duncan’s playoff wins are second most in playoff history.

.710: Winning percentage for the Spurs during Duncan’s career. It is the best 19-year stretch in NBA history and the best in the four major sports of any team during that time. The Patriots rank 2nd at .704. The Spurs won at least 60% of its game each of Duncan’s 19 seasons.

1,001: Wins for Duncan under Gregg Popovich. It is the most ever for a player-coach duo in NBA history.

Check out the NBA response to Duncan retirement on social media

It has been fun to watch you (but not defend you 😝) through the years.

We thank you for all that you've done for the game. #ThankYouTD pic.twitter.com/aQDxAPWvgt