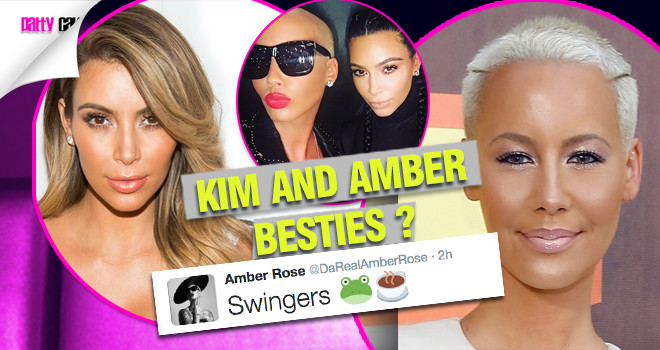 ‘tea, Anyone?’ Amber Rose And Kim Kardashian Send Social Media Into A Complete Frenzy As They Pose For Friendly Selfie After Amber’s Epic Kanye Tweet !!!

Kim Kardashian’s husband Kanye West was recently involved in a full on Twitter war with his ex, Amber Rose and, her ex, Wiz Khalifa.
Which ended very abruptly after Rose alluded to Mr. West favorite bedroom request was putting a few fingers in his butt x-rated I know…but don’t kill the message we just report it. Kanye immediately removed all his tweets centered around the fiasco, and since apologized pubicly But in a surprise twist of events, Today both Kim Kardashian, and Amber have posted a very friendly Instagram picture of herself with 32-year-old Amber, which shows that the spat is now water under the bridge.

Kim posted the sassy snap on Tuesday, proving that she has no ill feelings towards Amber, alongside the caption: ‘Tea, anyone?’ Amber shared the photo as well , writing ‘Swingers’ with a picture of a kermit the frog emoji, meaning ‘but it’s none of my business’ Let’s all be friends: Social media went into meltdown as fans commented on the shocking photo. The posts have caused a social media to go nuts and in quite a surprising fashion, but after Amber’s tweet about a very personal and somewhat crude tweet about what Kanye likes in the bedroom.

The picture comes after the rapper decided to give an indirect apology for dragging Amber and Wiz’s son Sebastian into the feud.

The rapper, 38, took to Twitter on Friday night and expressed his regret over his comments. Taking to Twitter again: Kanye West has used social media to make an indirect apology for dragging Amber Rose and Wiz Khalifa’s son into his war of words – he is seen here at LAX on Friday

He took to the twitter to say: ‘God’s dream …. Never speak on kids again’ Comment: The 38-year-old had previously made comments suggesting the reason Sebastian was around was because he seprated from Amber

Kanye had previously made comments relating to Sebastian, which suggested  the only reason he was around was because the rapper had split with his mother Amber Rose.

‘I know you mad every time you look at your child that this girl got you for 18 years’, Kanye tweeted on Thursday, referencing Wiz’s soon to be three-year-old son with Amber. No sweat to the OG! Amber was photographed looking like she didn’t have a care in the world as she took her son Sebastian out in Los Angeles the very next Monday So cute: The mother and son duo nothing like matching leather jackets. ‘You wouldn’t have a child if it wasn’t for me.’

Kanye later deleted his tweets after Amber got involved and she tweeted soon after: ‘Lol Now u wanna delete ur tweets cuz Muva has arrived?’

Initially, Kanye, had referred to Amber as a ‘stripper’ and implied she was a gold digger by referencing lyrics to his hit song during an exchange with Wiz.

Kanye wrote: ‘You let a stripper trap you.’

He made his move to calm the situation after responding to some rather candid comments earlier on Friday about what he is and isn’t into in the bedroom department.

Clarification: The rapper wanted fans to know that he was not exactly into what his ex accused him of on the microblogging site

Not one to shy away from letting his opinion be known, Kanye wrote: ‘Exes can be mad but just know I never let them play with my a**… I don’t do that… I stay away from that area all together.’

He followed up that gem, with perhaps a little too much information about his personal life as he even mentioned wife Kim Kardashian.

He wrote: ‘I’m not into that kind of s***… I like pictures and videos. Me and my wife got the kind of love that can turn exes into best friends.’ Its Kinda of ironic that Kanye said he and wife Kim Kardashian   have the ‘kind of love that can turn exes into best friends’ – under a photo he posted last September during his fashion show in New York .