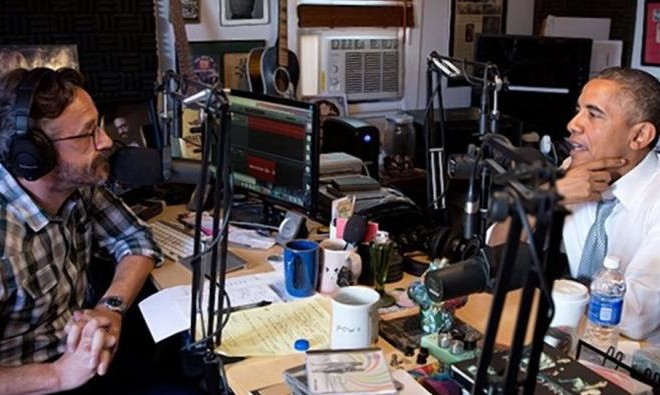 Talk about WTF moments…President Obama drops the N -bomb while expressing  his opinions on race relation. The U.S President explain that racism is still alive and kicking in the United States.

President Obama expressed his opinions on race Monday in the starkest possible terms, using the N-word to explain that racism is still alive and well in the U.S.

In an interview with Marc Maron on his “WTF” podcast, Obama said that the “the legacy of slavery, Jim Crow, discrimination in almost every institution of our lives, you know, that casts a long shadow, and that’s still part of our DNA that’s passed on. We’re not cured of it.”

The commander-in-chief also opined on last week’s horrific shooting at a historically black church in Charleston, where nine African-American worshipers were gunned down in an act of racist hatred, saying that the government must learn from “these shootings” and move forward with gun control reform.

“No other advanced nation on Earth … tolerates multiple shootings on a regular basis and considers it normal,” he said.

“It’s not enough to just feel bad,” Obama added. “There are actions that could be taken to make events like this less likely, and one of those actions we could take would be to enhance some basic, common-sense gun safety laws, that by the way, the majority of gun owners support.”

“The question is, is there a way of accommodating that legitimate set of traditions with some common-sense stuff that prevents a 21-year-old who is angry about something, or confused about something, or is racist, or is, you know, deranged from going into a gun store and suddenly is packing and can do enormous harm,” Obama said. “And that is not something that we have ever fully come to terms with.”

The President, however, reiterated his doubt that Congress will act any time soon — a fact that came into clear view for him, he explained, after the 2012 massacre at an elementary school in Newtown, Conn., where a gunman killed 20 children and six educators.