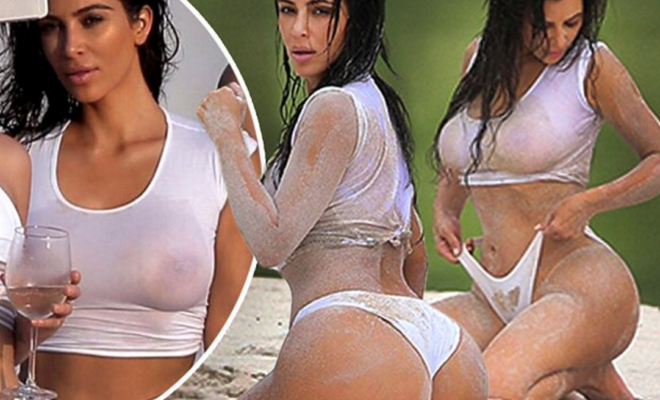 Kim Kardashian been quite the busy girl with studio interviews and shooting her family’s Los Angeles based reality show Keeping Up With The Kardashians for months now.

But last Friday, the 35-year-old wife of Kanye West took a breather and let her hair down as enjoyed a vacation in Punta Mita, Mexico, with her children North, aged three, and Saint, aged eight months.

And the queen of reality television did not disappoint as the diva flaunted her cakez in a wet white shirt and skimpy thong briefs while soaking up the sun with a smoldering array of sexy gal pals which including none other than the lovely Jasmine Sanders. What A Time To Be Alive: Kim Kardashian while drenched in salt water and sand particles posed for selfies in this wet top with two female hotties on the beach in Punta Mita, Mexico, last Friday 35-year-old E! diva also was draped in a high-waisted briefs that slide up on her 44 inch hips

The reality queen was unapologetic that her shirt was soaked with water and now see-through thanks to the good american 100% cotton fabric.

The reality star has been open about her strict low carb Atkins diet since she welcomed her son Saint in late December and has lose a whopping 70lbs in the process. She stated in a recent interview she has “been very careful about what she has eaten, choosing meats and vegetables over carbohydrates.” Taking A Break: At a glance the briskly beach trip looks like a nice break from the nonstop filming of the hit show”Keeping Up With The Kardashians “, but for the wife of mega star Kanye West there’s always money to be made as the trip quickly turned it into a mini photoshoot.

The Los Angeles socialite has also said she has been hitting the gym as early as 5 am to get a good start with her trainer as they workout, doing squats and sit ups as well as mixing it up with boxing.

Late last Wednesday younger sister Khloe Kardashian described on her website khloewithak.com that Kim’s diet as not for the faint oh heart as it was filled with too much meat and cut out nearly all sugar.

In an entry titled ‘KHLO-FIT: My Sisters’ Diets Are Cray,’ the 32-year-old wrote: ‘You won’t believe what my sisters actually eat. We all have such different eating habits that sometimes when we’re trying to choose a restaurant I wonder if we’re even related. LOL! Let’s Make A Sand Castle: As the photographer snapped away The queen of Reality TV posed while tugged at her briefs as she looked down at her as we like to call giant patty cakez. Assets On Fleek: While ol’ Kimmy Cakez has been on a strict Atkins diet since she the birth of her son Saint in December she has managed to lose a serious amount of weight nearly 70lbs. The Man Behind The Lens: Little is know about the young man in a white shirt and black folded up pants seen was taking the snaps with a Canon 70-200mm lens

‘[Kim’s diet] involves cutting out all sugar and carbs but it allows meat and dairy. I like sweets too much and also don’t eat red meat or dairy so I’m saying hell no to this one!’ Khloe Said

Spending some well earned time with the likes of  girlfriends , Jasmine Sanders and Stephanie Sheppard the icon appears to have such and awsome. But while her her selfie squad sipped cocktails and white wine, Kim refrained from the boozes and stayed faithful to her Atkins diet. In a recent interview, the television personality recently discussed the importance of positive body image.

She wrote on her website: ‘Having a positive self-image has always been important to me because it affects so many aspects of my life: my work, my relationship with my husband and my life as a mom.

‘After I had [North West], there was a part of me that was nervous about whether I’d be able to get back to anywhere near my pre-pregnancy weight and feel confident again, since I was now 50 pounds heavier.