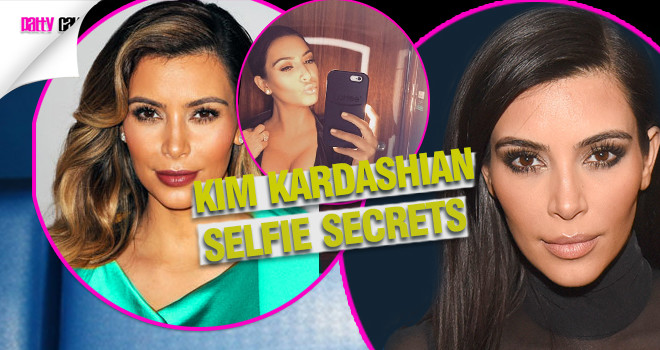 Have you ever been curious as to how  Kim Kardashian West always manages to take the perfect selfie? Well, she let Hillary Clinton in on her secrets.

Today the two made a guest appearance on The Ellen DeGeneres Show, Clinton told Ellen she’s taken loads of selfies on her Presidential campaign ride– but none can hold a candle to the selfies she took with the undisputed “Queen and King of Selfies,” Kardashian West and husband Kanye West. Last august the trio met in L.A. at a fundraiser for the Democratic front-runner – and  took a the legendary selfies.

“She has that face. She always has the same selfie face,” DeGeneres told Clinton. “Did you learn? Do you have a selfie face now?”

Selfies about to be LIT!!! The secret to my selfies https://t.co/GYe09RFqQp pic.twitter.com/z0MXmTHGVu

“No, I don’t. But here’s what I learned,” Clinton replied. “First of all, she was very nice and of course when she says to me, ‘Can we take a selfie?’ I said, ‘Hello, of course.’ I mean that’s like an obvious answer. She takes out her phone and she presses the button – I’ve never seen this anywhere else … She pulls it out, it has lights all the way around it, like, little tiny, tiny lightbulbs.”

“I saw her phone. It makes you look better,” DeGeneres said.

“It makes anybody look better,” Clinton said. “I have been desperately looking for one of those ever since with no luck. So if anybody knows where you can get one …”

She’s in luck. Kardashian West took to Twitter on Monday to reveal the “secret to her selfies,” even giving Clinton a special shout-out.

On the Ellen Show today Hilary Clinton talks about how she never looked better in our perfectly lit selfie! #LUMEE pic.twitter.com/6svy37T46u

DeGeneres said she, too, was eager to get her hands on the reality star’s secret selfie enhancer, joking that it works so well no one would ever know Kardashian West is “really in real life … hideous.”

“No, no. That’s not true,” Clinton said. “She’s beautiful. But I mean, she whips it out. She hits this button. The light is there. She holds it at a perfect angle and she makes everybody look better than you have any reason to look.”