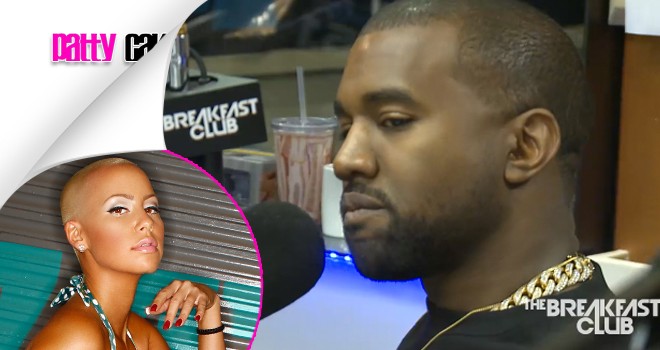 Kanye West Speaks: Tyga Was Smart For Bagging Kylie, No Women Wants To be with You After Amber !!!

Kanye Speaks: Tyga Was Smart For Bagging Kylie, Nobody Wants To be with You After Amber !!!

Kanye West makes his second debut with the infamous trio which The Breakfast Club earlier this morning, and he dropped A war head.Moments after DJ Envy asked ‘Yezus if Beyonce and Kim had issues with one another West  replied:Let Mr. West tell it … Beyonce  and Kim relationship is not estranged infact the Queen Bey has a picture of Kim Kardashian on her wall for inspiration?

“They love each other! When Beyonce’s working on her album she has pictures of Kim on the wall because Kim represents powerful women. Kim be playing “7/11″ for our daughter.”

Mr. West goes on to say there’s a mutual respect shared between the ladies much like professional athletes :

“They definitely respect each other but maybe there is a LeBron James, Kobe element to it, but I didn’t say that. “

Charlamagne then asked West if he thinks Tyga’s relationship with 17-year-old Kylie Jenner is appropriate and for once, Kanye was at a loss for words. Took a long pause since then the radio clip has been edited from the original message spewed over the radio air waves which had Kanye West admitting to Kylie and Tyga underage sexual relationship je also stated:

“I think he got in early, I think he was smart. They closer in age that a lot of relationships I know. I knew Tyga was smart.”

Interesting enough when C Tha God questioned Tyga his response were that they were just friends, Kanye pled the fifth and then said that:

“I can’t speak on anyone’s relationship.”

West also opened up about Drake a how the title  “Wolves” was originated he stated that originally the title to a planned collaborative album with Drake:

“I’m just going to go along and say because maybe this will promote it happening but the “Wolves” song came from a conversation that me and Drake had, where we were going to do an album together and the album is called Wolves.

Me and Jay started talking about Watch the Throne, then Drake went and did all the records with Lil Wayne and did the tour, so we never did it. But I just went out in the world, if y’all don’t like it y’all can send it right back [Laughs].

I asked him, we talked about it and he said yeah we was gonna do it. And actually he was sending beats back and forth and I got this one record with Young Thug that I’m gonna put on Rihanna’s album. I know I’m giving a lot of information.

But the real bombshell occurred when Yeezy defended his wife from ex Amber Rose‘s recent comments about her sex tape past, and said that Kim made him take thirty showers to wash off Amber Rose before they could date. Dayummm. ‘Ye also stated that if Kim would’ve allowed him to be with her when he orginally wanted to date her , there would be no Amber Rose’ …Ouchhhhhhhhhhh