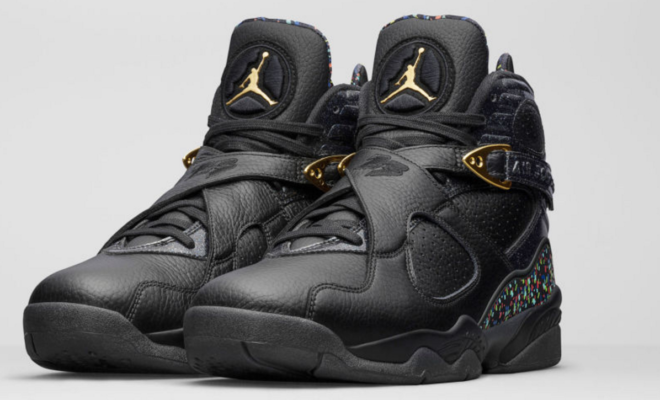 Recently rapper Fat Joe learned that even his celebrity status doesn’t protect him from nosy baggage poachers. Joe, one of the biggest sneakerheads in the Hip-Hop game, also known as the one who licked the bottom of a pair of Air Jordan’s on MTV Cribs, copped the two Air Jordan 8 sneakers which were released to celebrate Michael Jordan’s three-peat with the Chicago Bulls. But Joe’s fortune didn’t stop there; the shoes were embroidered with the TS logo of his Terror Squad crew on the tongue as well as an image of his face on the lace locks. These one of one player’s edition sneakers were made just for the rapper during his performance of “All The Way Up” at the BET Awards.

Joe took to Instagram posting a picture of the shoes explaining that the Air Jordan 8s, also known as Confetti’s, were part of his luggage that was stolen.

Don’t try this at home. I do this. 1of1 #allthewayup#betawards love for my jordan family @jumpman23 @heirmj523 & Reggie!

He says, “Ok look. There were mine for a couple hours. Damn baggage claim stole them in Vegas. I don’t blame you they are 1of1. Sorry Reggie I guess I got to charge it to the game #teamjordan #allthewayup #riconfettis”.

However, to be a one of a kind specially made shoe, Joe seems to be taking the loss well.

Ok look. These were mine for a couple hours. damn baggage claim stole them in Vegas. I don’t blame you they are 1of1. sorry Reggie I guess I gotta charge it to the game #teamjordan #allthewayup #ripconfettis