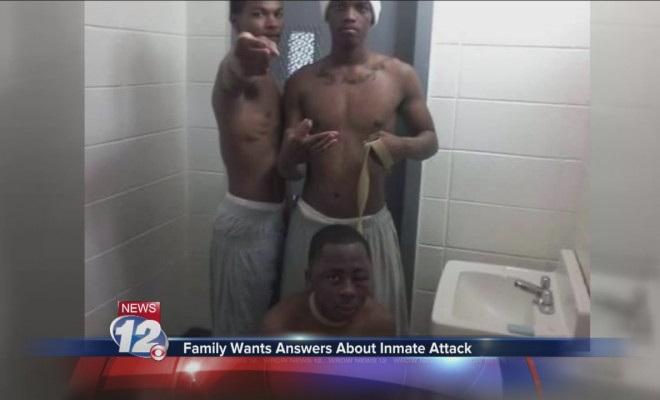 D*mn Shame: This Mom wants answers after photos of her beaten son in prison goes viral !!!!

Cell phone pictures surfaces of a women son being beaten inside of Georgia correctional facility by gang members….

(WRDW) — A mother wants answers after a picture shows her son beaten at a Georgia correctional facility. Augusta native Cortez Berry is pictured in a photo with his eye swollen shut, something around his neck resembling a noose or a leash, and two men standing over him.

Berry turned 18 Saturday, but it wasn’t much of a celebration. Instead of eating birthday cake, he’s nursing wounds from a prison beat down.

His mother, Demetria Harris, was first alerted by a friend that the disturbing photo of her son was circulating on Facebook Friday.

“I was like oh my God! What happened? How’d it happen? It’s a terrifying picture to see,” she said.

A million questions flooded her mind when she saw the photo. Was her son okay? How did a cell phone make it into the prison? Where were the guards?

“I want justice for him. I’m going to do whatever it takes to get it for him, because at the end of the day, he don’t deserve this. No one deserves this,” she said.

Berry landed himself in the Augusta YDC when he was 14 for assault, robbery, and theft. He was sent to the Burruss Correctional Training Center, a medium security detention center in Forsyth, Georgia last year for violating his probation.

“They’re not being protected. I don’t care what they’re there for, they still need to be protected,” said Harris.

The attack appears to be gang related. The caption of the photo posted on Facebook reads: ‘When you disrespect the Nation, it brings nothing but pain and suffering.’
Experts say it’s a reference to the gang, G.D. Nation, short for ‘gangsta disciples.’

Cortez’s aunt, Shavondria Wright was finally able to see him Saturday during visiting hours to find out what happened.

“Ten people jumped on him and just kept beating him and they choked him to sleep. Pretty much they left him there for dead,” Wright said.

The family’s biggest question in all of this: Where were the guards?

Now, his family wants justice and assurance their loved one will be able to pay his debt to society, without being killed.

“We could’ve lost him. He could’ve been dead. Especially when they hung the belt around his neck. He could’ve just been gone,” said Wright.

The Department of Corrections tells News 12: The Department is fully aware and this incident is currently under investigation. The Department does not allow inmates to have access to cellphones, as possession of such contraband is deemed illegal. Introduction of cellphones into our facilities is a nationwide issue the Corrections system is facing. The Department continuously works to utilize extensive resources to combat this issue. We take very seriously our mission of protecting the public and running safe and secure facilities.

Copyright WRDW-TV News 12. All rights reserved. This material may not be republished without express written permission.

Pattycakez Staff
← Previous Story Pharrell and Robin Thicke have been ordered to pay $7.3 million to Marvin Gaye’s family !
Next Story → Pimpin Ain’t EASY: NYC Woman Arrested For Being Married To 8 Men At The Same Time!