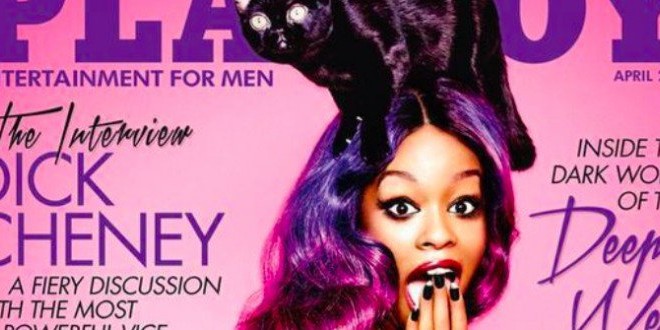 Azealia Banks gets naked, while talking sex and racism during an Interview with Playboy!!!! [NSFW]

It’s great to hear that Harlem-born rapper, Azealia Banks is on a US/UK tour right now, but did you hear about her playboy interview? The young New Yorker is no stranger to speaking her mind, unfiltered, and she took no break in staying true to herself.

A question along the lines of “Would she like to leave the US” was posed to her in the interview. Everything from there is interview history. Here’s what she had to say:

“I hate everything about this country. Like, I hate fat white Americans.”

She continued, giving her own perception of America:

“Those little teenage girls who work at Kmart and have a racist grandma — that’s really America.”

Banks commented on Jim Crow and poverty, as well:

She summed up the interview by saying that she feels:

“Such a general hatred for all straight white men.”

Twitterverse was at odds with whether she should be frowned upon our respected for such comments.

Take a look at some of those responses below. But, seriously, over the top or did she speak what others are afraid to say? Sound off in the comments.

idk what to do with this azealia banks interview. (this is a pool of milk) http://t.co/os3ie8s3Jm pic.twitter.com/fRplQgeen9

I simply can't with Azalea Banks and the racist hate she spewed in her Playboy interview. http://t.co/7bVogLrcsx

Pattycakez Staff
← Previous Story Is Tyga being Messy? Nicki Minaj Opens Up About Cash Money and her issues with Tyga !!!!!
Next Story → Cyn Santana Opens Up About Her Breast Reduction Surgery + Growing Obsession w/ Nicki Minaj !!!!