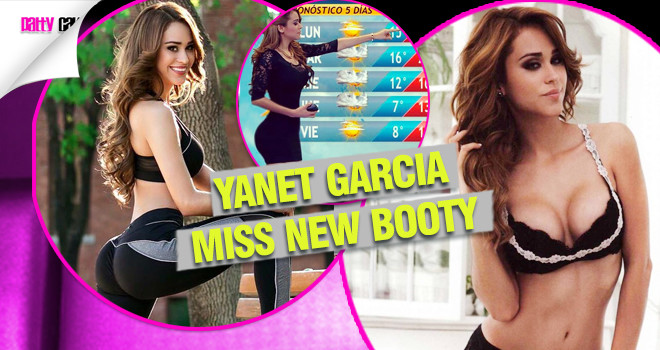 Yanet Garcia  The young lady who has become known as the ‘world’s hottest weather girl’ has been subject to some serious body critique as of late the hottie has denied several rumors that she has had butt implants after her buttocks appeared to have a massive overhaul in size ‘overnight’.

The 24 year old, elevated to worldwide stardom after TMZ and Playboy described her as a ‘girl that makes you want to watch the weather forecast’.

She is notorious for fluting off her “Pattycakez” while presenting the weather dressed in skimpy outfits, prompting extreme criticisms from religious communities in in her country.

The controversy all began in a recent show which left viewers confused when “asset” looked like it had dramatically changed in size virtually overnight, prompting gossip about plastic surgery. Yanet Garcia claims she has not had surgery on her butt! Yanet claims that if her butt is bigger it is all due to working out and staying fit. What do you think?

Yanet can be seen wearing a figure-hugging black dress which shows off her voluptuous figure .

However, Yanet, who has more than a million and a half Instagram followers, has come out to dispell the rumours saying that her curves are all down to staying fit and vital exercise.

Earlier this month she showed off pictures of her exercise routine to show her followers the exercises she does to keep her Cakez in shape.

On her Twitter account, Yanet wrote in response to the rumours: “Haha, please, exercise and live healthy to see the results.”

She has also retweeted countless news stories on her timeline that address her claims of denied cosmetic surgery allegations.