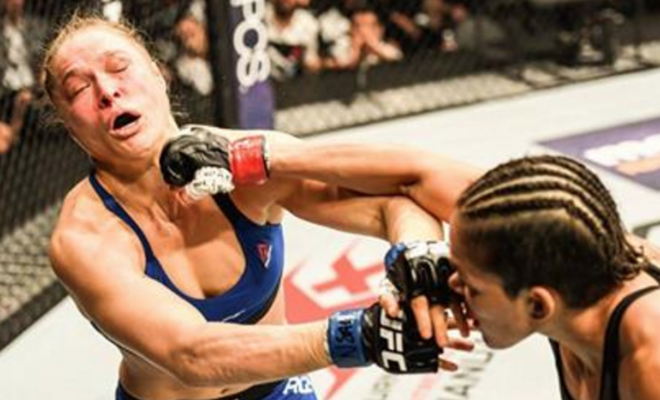 Ronda Rousey Gets Demolished In The First Round #UFC207

Ronda Rousey gets demolished in 48 sec of the very first round “ouch.

Amanda Nunes might have just ended the career of Ronda Rousey with a devastating win in under a minute to retain her bantamweight title.

Nunes threw a combination of several hard hitting punches that Rousey never quite recovered from. Follow along with our live blog and twitter feed to get all the analysis and updates live from Las Vegas.

LAS VEGAS – Ronda Rousey much anticipated returned to the UFC’s octagon Friday for the first time since her traumatizing beatdown she received 13 months earlier, and she was victimized yet again by a head-damaging flurry of right and left hook jabs that finished her in even quicker form.

Forty eight seconds into the first round to be exact, following a eight-punch succession with a combination of four hard hitting assault of blows landed by UFC women’s bantamweight champion Amanda Nunes, Rousey was counted out by technical knockout by referee Herb Dean.

“This moment is my moment,” Brazil’s Nunes (14-4) said in the octagon afterward. “Right now, I’m the champion.

“I know [fans] love Ronda Rousey, but I was really ready for this fight. I knew this was going to happen. I’m the best on the planet.”

UFC 207: Dana White says Rousey is ‘better than after the Holly Holm fight’

Dana White on Rousey: "Obviously she's so competitive & she's devastated. But she's better than where she was [after] the Holly Holm fight."

Ronda Rousey has apparently left the arena. No surprise. She hasn't talked to the MMA media in over 13 months.