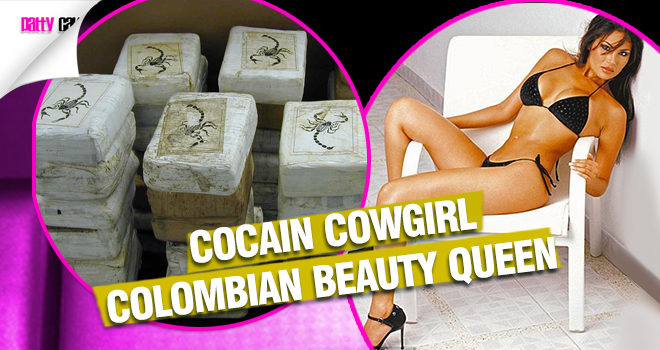 Queen Pin | Inside Look At Colombian Beauty Queen Arrested After Getting Models To Smuggle Cocaine From Argentina.

Colombian model arrested for allegedly heading a drug-trafficking gang that persuaded pretty young women to smuggle cocaine to Mexico after evading Argentine police for nearly five months.
Angie Sanclemente Valencia known to the world as a an Argentine Beauty Queen  was captured after hiding out in Buenos Aires since last December, when airport officials caught the then  21-year-old Argentine woman with more than 121 lbs of cocaine in her baggage boarding a flight to Cancun.
That incident led to the arrests of six other alleged gang members who all pointed the finger at  Colombia’s former ‘coffee queen’ as a ringleader.
Soon after Argentina’s news circuit quickly announced Sanclemente with the nickname of the ‘Narco Queen,’ but two officers involved in the case said her specific role in the smuggling organization has not been established.
‘When they organised the trafficking of cocaine to Mexico, she participated in the meetings,’ said one of the sources.
Police were able to determine Sanclemente’s identity because she had made quite an impression upon her arrival in Argentina, flying first class with a Pomeranian dog, the other official said.”

Airport policeman Maximiliano Lencina arrested a 30-year-old female model attending a hostel for foreigners in the fashionable Palermo neighborhood.
Lencina refused to discuss the evidence, but said Sanclemente ‘was an important figure in the organisation’ that allegedly recruited pretty young Argentine women to smuggle cocaine on flights to Cancun. 30 year old, Sanclemente former beauty queen , was detained in Buenos Aires for allegedly being the cheif player in a drug-trafficking operation that uses models as drug mules

Officials believed the former model was still in Argentina. Sanclemente announced her innocence on Facebook, where she posted pictures of Buenos Aires dated after Interpol issued a warrant for her arrest.

‘She is no drug trafficker, nor is she the queen of cocaine,’ her mother, Jeannette Valencia, declared after the arrest. After her mother arrived in the country weeks later to assist with her defense.

‘There are bad intentions – a plot against her. She will prove her innocence,’ Valencia told reporters after police prevented her from entering her daughter’s room.

The courts already rejected a request for special treatment from her lawyer, Guillermo Tiscornia, who said Sanclemente feared immediately turning herself to authorities to avoid being exposed to rape or other mistreatment in a common prison. The picture above shows Valencia’s mother, Janeth, speaks to the press after her daughter was arrested in Buenos Aires ‘I feel great anguish and desperation. I can’t rest, I’m very sad that the Argentines have treated me so badly, wiping away the trash with me. I don’t deserve this,’ Valencia told the Colombian newspaper El Tiempo.

Sanclemente, then aged 21, a native of Barranquilla, Colombia, was forced to give up her crown after winning her country’s National Coffee Queen beauty pageant. It was discovered she was married at the time which was a direct violation of pageant rules which forced pageant committee to decrown the recently announced queen.

Pattycakez Staff
← Previous Story WATCH: ABIGAIL RATCHFORD IN LINGERIE SEDUCES A SPORTS CAR IS JUST WHAT THE DOCTOR ORDERED
Next Story → Kendall Jenner Fires Back to Stephanie Seymour’s Supermodel Diss: ‘I’m Going to Stick Up for Myself’