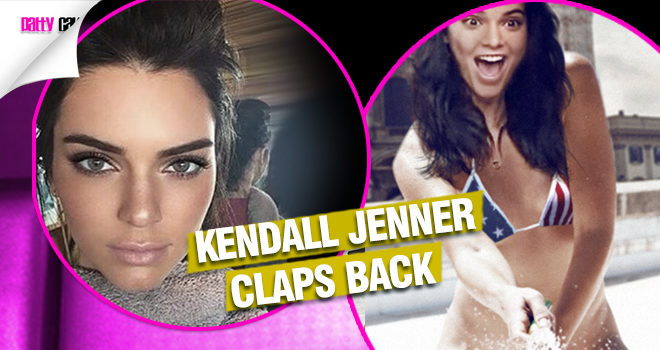 Kendall Jenner Fires Back to Stephanie Seymour’s Supermodel Diss: ‘I’m Going to Stick Up for Myself’

Kendall Jenner Reacts Back to Stephanie Seymour’s Supermodel Diss: ‘I’m Going to Stick Up for Myself’

Battle of the Cat walk! Last night Kendall Jenner chimed in on the great “supermodel debate”, replying to some of her critics including model vet Stephanie Seymour recent Vanity Fair interview, where she asserts that the social media generation led by Kendall and BFF Gigi Hadid should not be called supermodels rather “b****es of the moment.”

“They are completely different than we were,” Seymour, now age 47,told Vanity Fair. “Supermodels are sort of the thing of the past. They deserve their own title. [Kendall and Gigi] are beautiful girls, and I support all of them, but they need their own title,” she expressed, before adding, “B****es of the moment! That would be a good title for them.”

Kendall addressed Seymour’s negative comments in an open letter on her website, defending not only herself and Gigi, but also giving her opinion on “real supermodels.”

“If you choose to be a cyberbully, I’m going to stick up for myself,” she began. “No one is trying to steal Stephanie Seymour’s thing, or trying to be her. I actually looked up to her. She has a daughter! I guarantee you that she didn’t imagine someone so publicly shaming her daughter when she made those comments about us being ‘b****es of the moment.‘”

And while she dismisses Seymour’s model moniker, Kendall asserts that the industry she’s in is more about work ethic than labels.

“If people want to call Gigi and I supermodels now, it doesn’t take anything away from supermodels of the past. Obviously, I have so much respect for those women, but right now, we’re the models of this time. Significant? Maybe. Hardworking? For sure,” she shared.

“I’ve been greeted by a lot of respect from supermodel vets’, “who give me tips and build up my confidence, sending me notes after a spread comes out, saying, ‘You’re killing it.‘” Kendall added.

“That’s the classy way to behave and I fully intend on being a positive influence on anyone younger than me, my entire life,” she concluded.

This definitely isn’t the first time the two took a hit over their “supermodel status.” Earlier this year,Rebecca Romijn expressed her opinion that having a high social following does not “translate into revenue” in the fashion world.

“I know a lot of people — legitimate fashion people — can’t stand it” she said. “Hate it that these, you know, social media stars are now the supermodels in fashion. They are not true supermodels.”

Considering that Kendall and Gigi are walking catwalks all over the world, we’d say they’ve figured out their careers outside of social media.

What do you think of Kendall’s response to Seymour’s comment? Which side of the supermodel debate do you land on? Share below.

Pattycakez Staff
← Previous Story Queen Pin | Inside Look At Colombian Beauty Queen Arrested After Getting Models To Smuggle Cocaine From Argentina.
Next Story → That Moment We Realized We Weren’t Putting Enough #Respek On Tori Hughes’ Name!