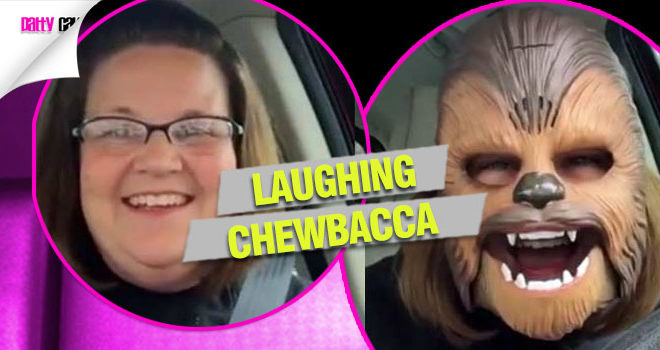 A little over a 100 million people have viewed this video of a woman laughing hysterically in a Chewbacca mask, making it the most viewed Facebook Live video ever, according to BBC.

American mom Candace Payne purchased little treat for herself at a retail giant Kohls in Texas. All she wanted to do was try on the Chewbacca mask and share how funny it was with her friends and family on Facebook. Oddly enough know the video would make headlines and go viral on the social networking site and make her an overnight internet sensation.

The 37-year-old went live with her video on May 20, headlining her session “It’s the simple joys in life….”

The video, not available on Facebook at the moment, shows her putting on the mask and trying unsuccessfully not to laugh. The mask doesn’t help either, which made the Chewbacca sound every time Mrs Payne stretched her jaw to open the mask’s mouth wider.

“That’s not me making that noise, it’s the mask,” she says laughing uncontrollably.

Originally the live video first posted by Mrs Payne was watched over 138 million times. She later uploaded the video  a second time on a separate page of hers and this too received over 21,000 views. Boy, that’s a lot of infectious laughter. No wonder reports suggest the same mask is now out of stock.

If you need a laugh this sad Monday morning, Trust , Cakesters this is just what the doctor prescribe.