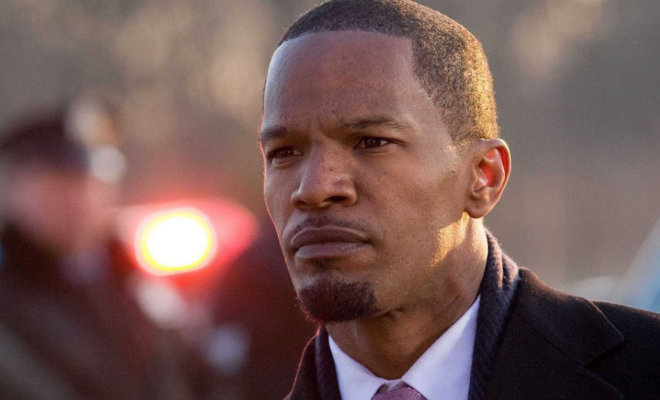 Speaking of the Oscars, Academy Award winning actor Jamie Foxx is in the news for his latest role,  but this time the part is unscripted, and actual real life.

ABC news reports that the sexy crooner arrived on the scene of a vehicle engulfed in flames in front of Foxx’s Los Angeles home.

Before long, an EMT worker arrived and they whirled together to free the driver who had crashed his truck after losing control of the wheel.

Foxx rejects the title “hero”, he was simply helping someone in need.

Talk about selfless! Way to go, both of them!

LOS ANGELES — Jamie Foxx won an Oscar for his portrayal of Ray Charles. Now, he’s winning praise for a live performance, playing himself in the role of a real-life hero.

The drama unfolded Monday night in front of Foxx’s house in an upscale neighborhood just outside of Los Angeles.

“When I get here, the truck is over on its side and it’s, it’s in flames,” Foxx recalled.

The driver, 32-year-old Brett Kyle, was still inside.

An off-duty first responder helped Foxx pull Kyle from the wreckage as the flames grew. He was trapped by his seatbelt.

“Luckily, a guy pulls up. He has EMT scissors, hits the window, and clears the glass. I climb in and I grab the scissors from him, cut the seatbelt,” Foxx recalled. “And as we pull him out, within five seconds later, the truck goes up (in flames).”

Police say Kyle, seen lying on the ground after the rescue, was speeding and under the influence of alcohol when he lost control and hit a ditch, causing his truck to flip several times before bursting into flames.

Brad Kyle stopped by the scene later to thank Foxx.

“It doesn’t matter to me who it was or what they do for a living or whatever,” he said. “Just the idea that someone would do that is so much more than I could fathom.”

As Kyle recovers in the hospital, his family is grateful for the unscripted act of bravery.