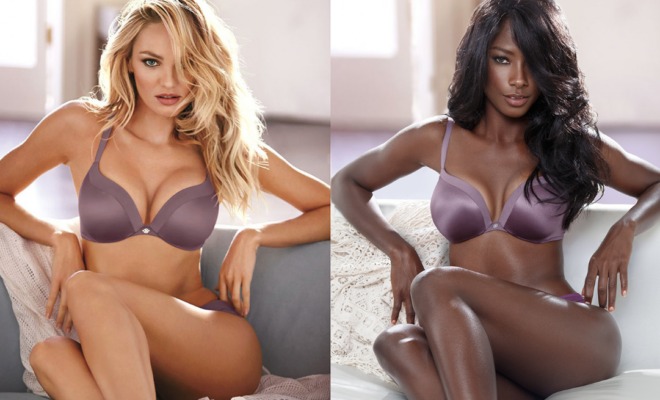 In recent years the modeling industry has made some serious strides in the fight for diversity, however as one African model points out with an assortment of photos from her social experiment , it still has a long way to go before we will see true diversity.

Deddeh Howard, who was bred in Liberia and now a transplant of  Los Angeles, faced some serious issues in her accesdenced,  into the modeling industry. She has been told by tons of high-end fashion agencies  ‘thanks but no thanks’, explaining that they already have enough black models on their rosters.

To draw awareness around the issues circulating diversity in the fashion industries, she calls for much need visibility among black models,  by recreating some of today’s biggest designer campaigns, where she opts to take the place of stars like Gisele Bundchen, Kendall Jenner, Gigi Hadid, and Kate Moss. Double Trouble: The recreation of  several high-profile fashion campaigns from Model Deddeh Howard can be seen on her instagram page this one is from Vivra campaign featuring supermodel Gisele Bundchen The original: The chocolate bombshell teamed up with photographer Raffael Dickreuter for the project, and the two imitated ads like this Victoria’s Secret one starring Candice Swanepoel down to every minutiae detail. Deddeh has been quoted saying she wants to draw attention to the need for more diversity in the modeling industry. Spot the difference? The model and photographer recreated every pose and lighting technique of each shot When asked why she felt the need to partake on this social experiment Deddeh said when she first started, agencies would tell her they already had a black model.

‘Not to long ago, … I would walk into various fashion model agencies and I would immediately be compared to … one or two black model that they had on the roster,’ Deddeh explained on her website.

‘Even though I was told by those agencies that I have an amazing look and [they] wish they could represent me, they already have a black model,’ she recalled. ‘It seemed as if one or two black models on the roster are enough to represent us all. When you are told that, trust me, it feels bizarre.’

True, she went on, stunners like Naomi Campbell and Iman are household names — but they are the exception, not the norm.

To carry out her vision, Deddeh teamed up with photographer Los Angeles based Photographer Raffael Dickreuter to reshoot some of the biggest campaigns by Gucci, Guess, Louis Vuitton, and Victoria’s Secret.