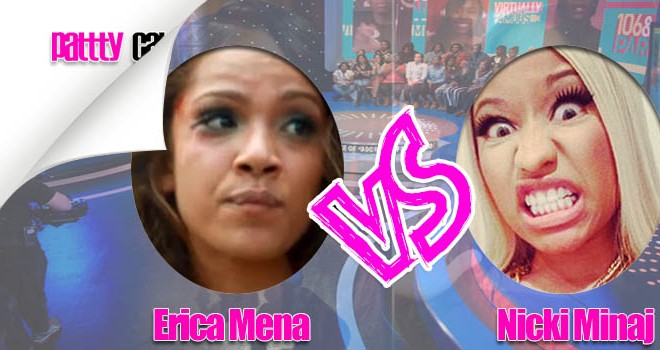 Filling in for the show’s regular hosts, Erica welcomed Lil Kim to “106 & Park” and the “Love & Hip Hop: New York” made it clear that there’s little debate in her mind when it comes to which artist reigns supreme.

During the interview with Kim, Erica Mena made reference to others “biting” Kim’s style, and later mentioned Nicki by name. Many Nicki fans were seriously offended  after Erica made the remarks about Kim and Nicki were “running New York” together .

Another shared the same sentiments: “@iamErica_Mena is such a hater she’s always somewhere SNEAK dissing The Queen #NickiMinaj #QueenofRap.”

After receiving criticism from Nicki’s fans, Erica took to Twitter to explain herself, and she was unapologetic.

Pattycakez Staff
← Previous Story Pattycakez EXCLUSIVE: Was Drake SMASHING NBA Player’s Girlfriend . . While he was out the Country on vacation???
Next Story → He Scored! 49ers QB Colin Kaepernick has a baby on the way..Well…Maybe!! and guess which IG model they said he knock up!!!!!