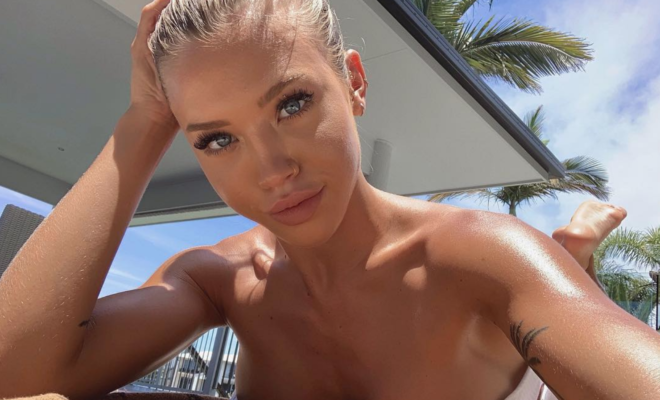 Well I guess Tammy Hembrow wasn’t completely nude she did manage to have on a white over coat and sunglasses.

Nonetheless fans were still angered and slammed Hembrow in the comment section for her filming a selfie while driving, From the looks of things Hembrow appears to be in the backseat.

The model posted another photo earlier in the day wearing the same outfit. She captioned the photo, “Speaking on the panel today at the Instagram balance brunch.”

Hembrow previously made headlines a few months earlier, when she was rushed to the hospital during Kylie Jenner’s 21st birthday party. After the incident, she took it upon herself to address the event and explained her reasoning for the occurrence in a YouTube video.

“So, basically what happened was I was in L.A. I was running off pretty much 30 hours no sleep. I was struggling to stay awake even when I was getting my hair and makeup done. I was literally sitting there, like, falling asleep. Like, I could barely keep my eyes open.”

Before that, the fit mom made headlines for literally being just that a a fit mom.

“Being a mum is the best thing I’ve ever experienced. The sleepless nights, the poo explosions, the endless spit ups, the tantrums, the first words, the giggles, the unconditional love, the snuggles. I love EVERYTHING about being a mama to my two little loves and I thank God every single day for giving me the best gifts I could have ever imagined. It’s a 24/7 job and it’s a job I LOVE” 💘💘💘

Pattycakez Staff
← Previous Story Pattygurl | These 25 Photos Of Gorgeous Model Lauren Wood Will Have You In a Daze!
Next Story → Pattygurl | What Sexy Woman Need With Ashley Arre