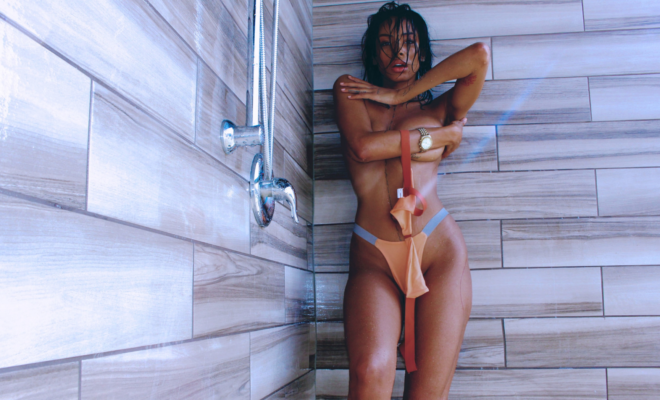 I have spent my share of days on sets of photoshoots, and it’s no secret that when the session is a great one the energy is a dynamic force. So, believe me when I say on set with emerging artist, and fierce model, Tlazsa, was no different.

Well, to be honest, actually, it kind of was.

Tlazsa, (pronounced Tuh-La-za) had a completely different set of vibes. I lingered back for a second like a fly on the wall and watched as she did her thing. She was shooting her shower series. Fellows, yes, it was as steamy, sultry and drenching as one could imagine, and ladies, I was downright green with envy. 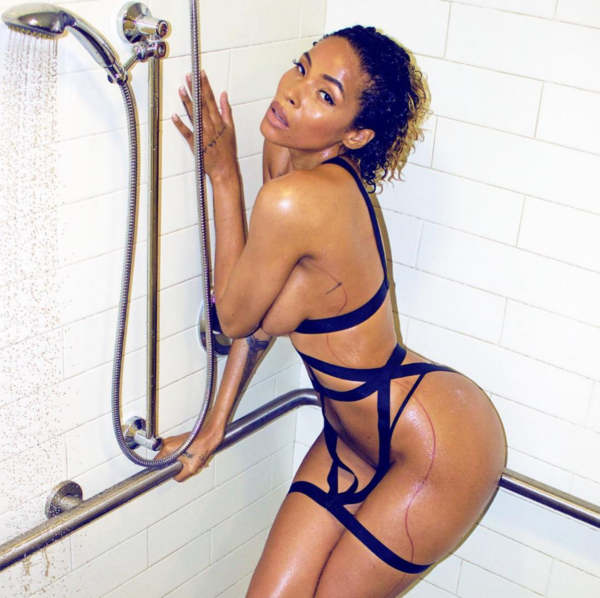 I gushed in the opportunity to witness such fluidity in her shots, owning her sensuality while the water ran according to perfection. I was simply convinced that this lady had a reign on all nature. From the water that she had obviously demanded to drip and bead to perfection, all the way to the essence and grace in which Gina, the photographer, moved so well with Tlazsa’s poses.

They wrapped the set and of course, a team rushed to accommodate with towels. I slid over to the same shower, removing my pumps, asking was it my turn. She was so amazing; she’d made me feel as if I could definitely embody that kind of magnetic power.

But, that’s for another time, right?

Tlazsa re-emerged, hair wrapped and in a long silky robe, but honey, she was strutting in a pair of salacious pumps, serving fierceness with a side of long, toned legs. Her smile was large and bright. We sat for a one-on-one for a bit in-between her sets. 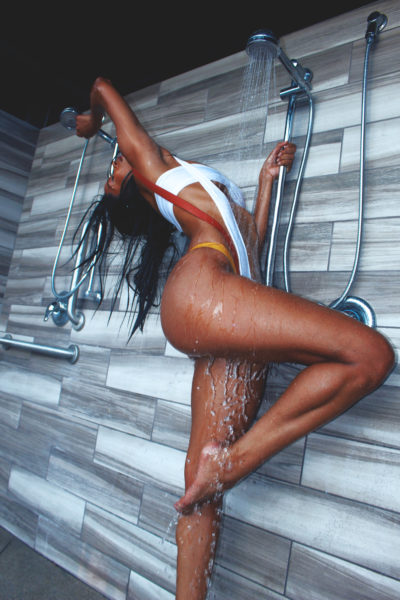 While I could simply say that she is adorable, yet an amazing person, that would not be enough. So, I’ll let you in on the scoop.

PC: Hey Beautiful, I know you are a busy lady, sexy photo shoots, creating new music, jet setting from your west coast home to handle business on the east coast! So with that being said, we can consider this chat a bit of a power round. Not to mention your glam team is in the back looking at me and tapping their watches! So for starters how do you feel about the term “Urban Model?”

“Urban sometimes gets portrayed as ratchet or ghetto, which I don’t agree with because urbanism is apart of our culture. As long as it is not being used in a condescending way it doesn’t bother me. I believe there are many lanes for modeling so urban is just one of the many. All of the “high fashion” modeling in some way shape or form takes from the urban culture through the brands that they represent. So at the end of the day it is all just one in the same.” PC: Nowadays it seems to be a fine line drawn between stripper, models and video vixen.. Do you feel there all the same…these days and do you think the hustle is taking away from the integrity of the industry…

“When it comes to Dancers, Models, and Video Vixens I don’t believe they are the same or they would all be called one thing. I do think many women in these industries add other hats to their lineup so that in turn starts to make that line very thin to people looking in. I don’t really think there was much integrity to start with anyway it’s always been about the hustle.”

PC: Do you consider urban modeling art or is it solely industry money based no real talent in this game..

“Urban modeling is whatever who does it wants it to be. It’s not up to me to say what is art and what isn’t.” PC: Do you feel you’re looked at as a glamour model or urban model or a swimwear model etc?

“Honestly I don’t know what people look at me and think when it comes to modeling. I just create what I want. I want people to look at me and see a creative. If it comes off urban ok if it comes off high end or glam ok!”
PC: What’s the main difference between glam vs urban modeling !

“I would say the main difference between glam and urban modeling is the model usually.” “My favorite photographer thus far to work with has been Sasha Samsonova.”

PC: If you had to choose on image of yours to represent you and your brand what would that photo be?

“A photo of myself–probably a close up of some sort” PC: Do you think by being looked at as a glamour model it limits women’s options in mainstream and you can only accepted in certain circles.

“I think with anything you do and you began to get labeled as that which in turn can limit you sometimes. When it comes to social circles it can probably become cliquey, but I’m really not to sure because I don’t get caught up in all that.”

PC: First time you book an appearances want was that experience like … Is there still a decent amount money in hosting parties , car & bikes shows, club appearances .

“I don’t do club hosting. I’ve never dabbled in that.” PC: How do you feel about the lack of recognition glamour models receive in the mainstream media

“Certain Glamour models receive a lot of recognition in the mainstream media. Now for the ones that don’t..well I guess it’s all apart of the game.”
PC: Have you experienced photographers abusing their power with vulnerable models, not getting paid for gigs?

“I’ve never experienced anything crazy with a photographer like not getting paid because they don’t book me for jobs. I’m with a couple agencies and it definitely helps.” Hmm..I’d would have to say 50 cents show Power. Classic movie has to be Sea of Love

My Favorite Singer is Stevie Wonder” PC: Thoughts on plastic surgery do you have any work done ?

My thoughts on plastic surgery are as follows: do what makes you happy.

Tlazsa:  No surgeries, YET. (laughing) Please ladies and gentlemen please do not do underground surgery!!! Way to risky PC: Advice you received that stuck with you since entering this industry? PC: Anything you want to share with our reader before we conclude.

This 2016 I kicked it off with my Music. This is the first time that I have shared what I’ve been working on with the world. There will be much much more music and fashion all 16. Pattycakez Staff
← Previous Story Why We Fell In Love With Brazilian Model Aline Lima On Instagram
Next Story → Remember ‘My Wife & Kids’ Star Parker McKenna Posey She’s Now All Grown Up And Sexy As Ever!