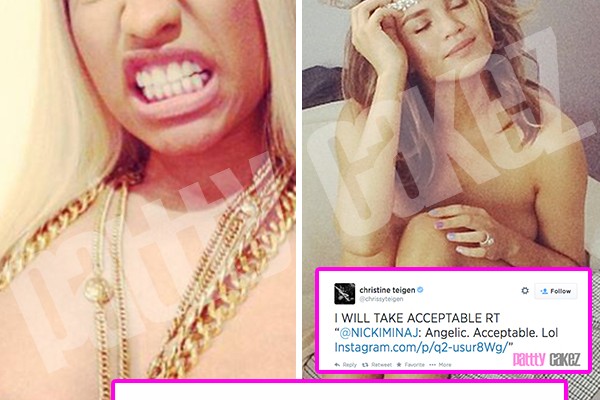 In recent news Nicki Minaj’s fans have been relentless to Supermodel Chrissy Teigen after she commented on the rapper’s “Anaconda” single art. Earlier this week Nicki respond to the backlash over her cover art by posting super like models like Teigen and Kate Upton on her Instagram page to further her argument that curvier women are seen as trashy and rachet, while petite women are praised in society. Nicki Minaj posted a pic on her instagram page of Teigen with the caption “Angelic, Acceptable” doing a similar pose on her Sports Illustrated cover. The supermodel then retweeted the Female MC with the comment “I WILL TAKE ACCEPTABLE” and was bombarded with tweets from the rapper’s fans. One Barb tweeted “Nicki Minaj gets King magazine covers & @chrissyteigen can only get sports illustrated she a bum h**” Another fan express similar feeling toward the super model. With comments like “bish eye see right through you MAD NICKI WINNING! WHERE YOU BET AWARDS? WHERE YOUR ALBUMS! F***OUTTA HERE NO A** B****” Teigen who appeared to be flustered by the Nicki’s barbs later explained that she didn’t mean any harm from her tweet. The supermodel tweeted “landed, saw she posted our cover, called our asses acceptable. Which I took as a compliment as I know I have no ass. Now pure entertainment.” Do you think Teigen meant any malice with her comments under the photo?

Pattycakez Staff
← Previous Story NICKI MINAJ DECIDES TO PUSHES BACK HER SINGLE ‘ANACONDA’, TEASES HER FANS WITH SEXY PIC!!!!!!
Next Story → COCO SHOWS OFF HER MASSIVE CAKEZ ON TWITTER!!!!