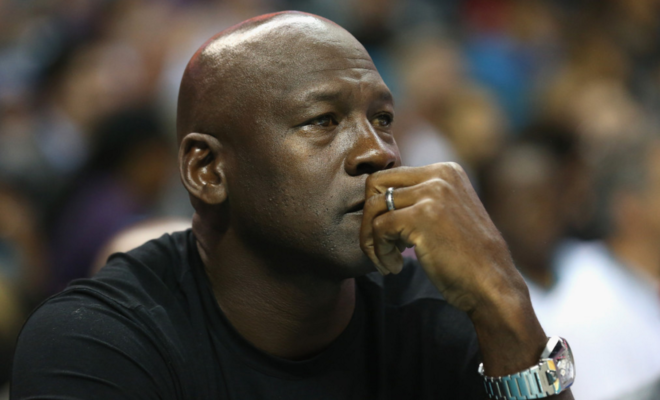 Michael Jordan Open Up | ‘I Can No Longer Stay Silent’

Michael Jordan tells “The Undefeated” he is donating $2 million to aid community and police relations.

For most of his time as a public figure, Michael Jordan has taken heat for not being outspoken enough on politics and social justice issues.

The oft-disputed quote “Republicans buy sneakers, too” has long been attributed to him, after he failed to throw his weight behind the 1990 U.S. Senate candidate Harvey Gantt, an African-American lawmaker challenging the infamously racially insensitive Sen. Jesse Helms.

But on Monday, Jordan wrote a personal essay for the African-American themed sports blog The Undefeated — breaking with his decades-long tradition of largely being agnostic when it comes controversy.
In a post entitled “I Can No Longer Stay Silent,” Jordan referenced the 1993 gun-violence related death of his own father to underline how the shootings of unarmed black men is a deeply personal issue for him. “I grieve with the families who have lost loved ones, as I know their pain all too well,” he wrote.

“I was raised by parents who taught me to love and respect people regardless of their race or background, so I am saddened and frustrated by the divisive rhetoric and racial tensions that seem to be getting worse as of late. I know this country is better than that, and I can no longer stay silent,” Jordan added. “We need to find solutions that ensure people of color receive fair and equal treatment AND that police officers — who put their lives on the line every day to protect us all — are respected and supported.”

Jordan, who remains one of highest-earning athletes despite having retired from the game of basketball 13 years ago, has pledged to contribute $1 million to the Internal Association of Chiefs of Police’s Institute for Community-Police Relations and the NAACP Legal Defense Fund.
“We are privileged to live in the world’s greatest country — a country that has provided my family and me the greatest of opportunities,” wrote Jordan. “The problems we face didn’t happen overnight and they won’t be solved tomorrow, but if we all work together, we can foster greater understanding, positive change and create a more peaceful world for ourselves, our children, our families and our communities.”

LDF president Sherrilyn Ifill said they will use the donation from the legendary Chicago Bulls star to “deepen our engagement on the issue of policing reform at this critical time in our country.”

“It is an act of true leadership that Mr. Jordan has chosen to use his stature to highlight the importance of this issue to all Americans and by taking a personal stance in support of organizations directly engaged in addressing this crisis in our nation,” Ifill said in statement.

Jordan, in his statement, said his donation to the IACP will help fund the police group’s “newly established Institute for Community-Police Relations, which launched in May to execute recommendations made in the report of the President’s Task Force on 21st Century Policing.”

The task force chaired by Philadelphia Police Commissioner Charles Ramsey and Laurie Robinson, a professor of criminology at George Mason University, was convened in the wake of the police killings of Michael Brown in Ferguson, Missouri and Eric Garner on Staten Island, New York.

“I can’t overstate how pleased we are to be getting a donation from Mr. Jordan,” said IACP executive director Vincent Talucci.

Among other thing, Talucci said, they will use the money to fund training programs and help police departments build bridges to minority communities.

While Jordan’s position on gun violence is hardly a radical one, his uncharacteristically candid commentary is an unexpected declaration for the NBA icon who fellow Hall of Famer Kareem Abdul-Jabbar once accused of choosing “commerce over conscience.”

In recent years, Jordan was also dinged for helping turn his beloved sneaker brand into a literally dangerous commodity in communities of color and for not being more active on behalf of Barack Obama during his campaigns for the White House (although he did appear at a 2012 fundraiser for him).

Meanwhile, Jordan’s remarks come after a flurry of activist statements from current professional basketball players. NBA superstars LeBron James, Carmelo Anthony, Chris Paul and Dwyane Wade all made public pleas to stop the violence at the opening of this years’ ESPY awards.

And the WNBA’s Phoenix Mercury, New York Liberty and the Indiana Fever went even further, donning shirts with hashtags honoring Black Lives Matter and the white police officers murdered recently in Dallas. There actions resulted in small fines for the players, and they responded by refusing to take any sports-related questions in a follow-up game. The league eventually rescinded their punishments.
This is also not the first time recently that Jordan, the owner of the NBA franchise the Charlotte Hornets, has been dragged into a public dispute which speaks to cultural issues. Last week, Jordan begrudgingly agreed with the NBA’s decision to pull next year’s All-Star game out of Charlotte in protest of the state of North Carolina’s controversial “bathroom bill,” which many believe permits discrimination against the LGBT community.

And in 2014, Jordan weighed in on the controversy swirling around then-Los Angeles Clippers owner Donald Sterling, who was caught on tape making racially prejudiced statements about his own players.

“I look at this from two perspectives — as a current owner and as a former player,”Jordan said in a statement at the time. “As an owner, I’m obviously disgusted that a fellow team owner could hold such sickening and offensive views.”

Perhaps, just as Jordan predicted at his polarizing Hall of Fame induction ceremony speech that his journey with the game of basketball was far from over, it appears that his evolution as a public figure with considerable influence has continued, too.