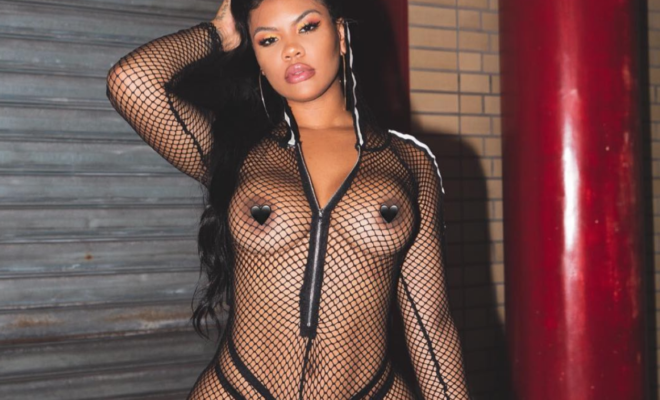 The “Love & Hip-Hop Brands has been a staple in reality television for some years now and with the new Miami, Edition ” the show seems to never have a dull moment.

The current roster on the Miami season features Video Vixen turned rapper Taylor Hing Aka Chinese Kitty. If you follow Pattycakez.com you know we’ve been covering Chinese Kitty for years now and after taking some time off from modeling to have her 2 year old son the 23 year old IG Socialite is back leading the pack strong on Social media.

Pressured into get back on to the Gram after giving birth Kitty sought to surgery to speed up the recovery process. Although she had a little lipo help she still putting the necessary work in at the gym.

Kitty has garnered nearly two million followers — prior to appearing on “LHHMIA.”

Much like Cardi B and Amara La Negra, two female music stars who signed huge recording contracts after getting some reality TV exposure It would seem Kitty is trying not to miss her opportunity as well.

She captioned her photo this way: “Thank you all for being patient wit a Kitty but it’s finally here my first record I hope y’all love it I put everything into making my music now it’s go time.” Ready Set Go ! Click the link in my bio “On Me” out on SoundCloud Now #Kittygang #CK #LHHM #VH1 #Hiphop s/o @otisbruno @k1_track4merz @natetrack4merz @g_scaletrack4merz @shanetrack4merz.”

Kitty believes in cosmetic surgery. She’s had liposuction and her breasts worked on and after her experience she can understand why some people want to hide getting work done because people can be so judgmental, but Kitty doesn’t seem to care if the public approves of her decision.

Kitty and her mother seem inseparably these days; we saw “Chinese Nicky,  Kitty mom “go off on her old acquaintance  Shay Johnson when Johnson went to throw something at Chinese Kitty, but they really are super close. According to Kitty, her biggest supporter in everything that she’s done has been her mom. Everything from having her son, to staying motivated to get back in shape and getting work on her body done.