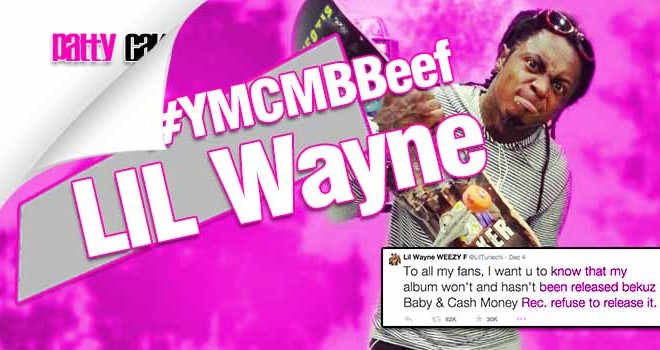 Damn Wayne?!
This has got to possibly be the most trending topic this past week.
Wayne took to twitter and released a string of tweets that were clearly emotional. Wayne revealed that he wanted to be free of the prison he was in, otherwise known as his label, Cash Money Records.
As we all know,  the Carter IV is well overdue and he shot that the release has been delayed yet again thanks to Birdman.
This comes on the heels of three other artists either leaving or putting the label on blast. Recently, Tyga took to Twitter and expressed his frustrations.
We might just witness the fall of an empire. One that many of us never imagined to see in a lifetime.

So its not official but from the looks of things Birdman kinda addressed the situation with his recent post on Instagram that Rich Gang is his priority now, the timing of this is quite funny considering the complaint from Cash Money’s cash cow.

The photo displays Cash Money Ceo “Baby Williams” smoking a cigar and stepping on several bundles of cash laid on the floor, while hanging with his Rich Gang associates along with the caption “RICHGANG $Machine.”

Rumors have been circulating over the web that Baby’s true focus is on “Rich Gang” now, particularly on Young Thug and Rich Homie Quan, Some have speculated that this may have a lot to do with Lil Wayne’s frustrations. Only time will reveal the truth but in the mean time the Web is having a field day with the funny memes and jokes about the YMCMB recent disputes.

CHECK OUT LIL WAYNE TWEETS BELOW!

To all my fans, I want u to know that my album won't and hasn't been released bekuz Baby & Cash Money Rec. refuse to release it.

This is not my fault. I am truly and deeply sorry to all my fans but most of all to myself and my family for putting us in this situation.

I am a prisoner and so is my creativity Again,I am truly sorry and I don't blame ya if ya fed up with waiting 4 me & this album. But thk u