LaLa Anthony Spills The Beans About Her Upcomming Topless Sex Scene On “Power”!

LaLa Anthony has confirmed on her recent Breakfast club interview why Melo Didn’t attend the Pacquiao vs Mayweather Fight, upcomming movie roles and  that she indeed will be filmed completely nude in her first ever sex scene on the hit television series, “Power”. Anthony says going topless in the scene, did however make Carmelo uncortable and he isn’t a fan of the idea. According to her,

“On “Power” this upcoming season (episode 4 to be exact), I have my first sex scene!  Carmelo said he understands it, it’s my job, but he doesn’t want to watch it.  Yeah [I’ll be topless]. And yeah [nipples will be out].

To be on “Power”, you have to sign a nudity clause off the bat.  At some point, everybody has to show something.  It was tasteful and respectful so I felt good about it.  I’m acting, I’m taking it serious, it comes with a territory.  What, are you never going to do a sex scene and you’re an actress?  That’s unreasonable.” 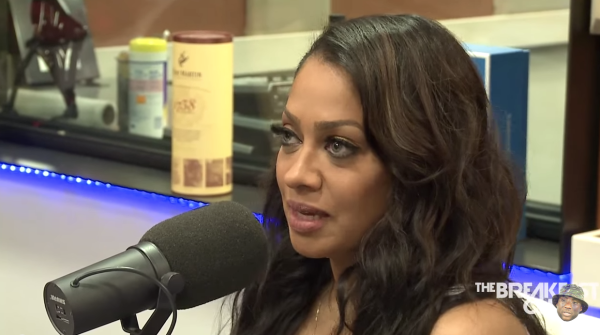 After being asked  why her and Carmelo didn’t go to the fight in Vegas:

“The truth is, Melo said he wasn’t paying that much for those tickets. They gave him a great deal, but still, he was like, I’m not paying that much.  And Melo is not a Vegas person.  I love Vegas.  I can stay there for a long time, but he’s not into it.  He wanted to fly in for the fight and as soon as it was over, fly right back.  I was like, we’re not going to go all that way and party and just…it’s not point.

So he said he’d rather just stay here  Melo would rater work out.  Literally, all day long.  After watching the fight, it was great and I was so happy Floyd won, but I was also happy we didn’t come out out pockets for all that money for those tickets.  Of course we could have [hosted a party and made it right back], we got some good offers, but we just chilled out.  It was nice.”

In the interview LaLa seemed to be very excited about this scene Check out full interview above!