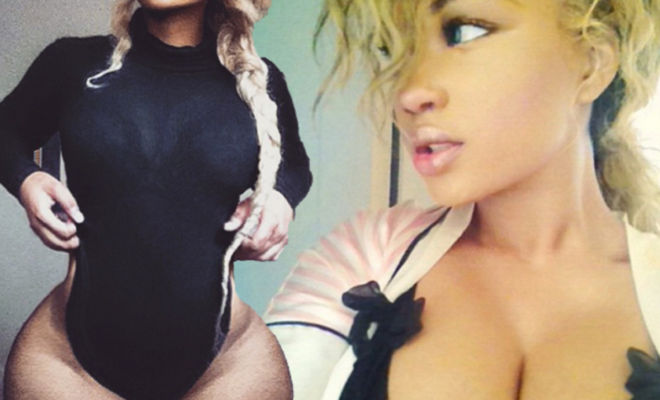 But did she fail? Check out video and photos below and let us know what you think

Via Vlad Tv
“I decided to do the interview just to prove that I am real,” Raychiel stated. The buxom blonde beauty has had offers to appear places ever since she made her debut on social networks, but for the most part has turned them all down — Rachiel was even asked to appear on World Star Hip Hop, which she says she refused to do. She’s also never done any professional modeling “because it’s very cliche.”

When it comes to her family, the French Creole/Dominican/Jamaican/Puerto Rican/Native American Cali girl says all of the women in her family are “bottom-heavy.” What was most surprising, however, was the fact that she had an extremely close relationship with the slain legend Mac Dre. Raychiel claims Dre is her nephew’s uncle and she grew up watching him live a normal life, playing videos games and such at a young age. She says he was killed while she was in junior high, and she was so overcome with stress she had to eventually be taken out of school.”

And then there was this …….hmmmm

Do you still thinks she photoshopping her photos ?

Pattycakez Staff
← Previous Story Raychiel Address Rumors of Her Body Being Fake And Photoshopping Her IG Photos !!!
Next Story → Sophia Body Regrets Having Multiple Tattoos: I Kinda Wish I Didn’t Get Any !!!