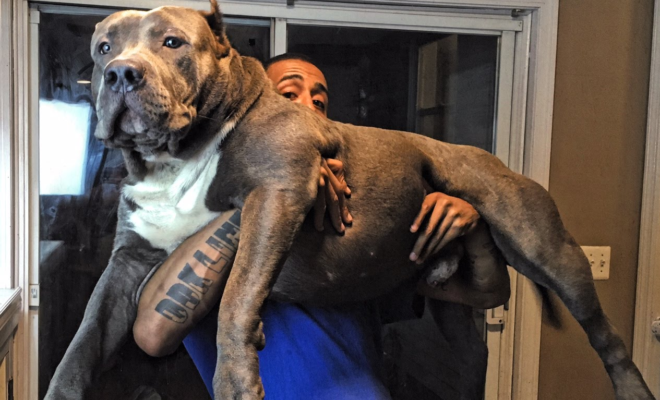 MEET Kobe, son to giant pitbull, Hulk, who is going to be the next ultimate protection dog. Earlier in the year the biggest pitbull in the world – who weighs a whopping 12 stone – fathered eight puppies that could collectively command $500,000 (£320,000) if they complete owner’s Marlon Grennan’s training school to become elite protection dogs. Marlon, 28, is currently training the next big star of Dark Dynasty K9s with eight-month-old puppy Kobe. At the beginning of Kobe’s training the powerful pup was reluctant to bite or tug, leading owner Marlon to push his training further with the eight-month-old being taught to attack and release on command as well as vault and assault would-be assailants in and on cars.

Pattycakez Staff
← Previous Story Model Tiana Parker Stars Alongside Wale For His Debut Song ‘My P.Y.T.’ | Listen
Next Story → Nipsey Hussle Drops A Double Video For “Grindin’ All My Life/ Stucc In The Grind”