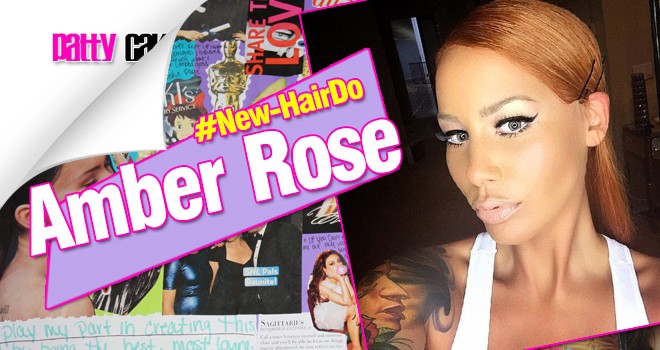 What u Think?: Baldie model Amber Rose is damn near unrecognizable after trying on long red wig

The bald model has been quoted numerous times saying she prefers little to no hair but, this week she decide to switch it up a little but still semi-androgynous.

But on Friday 17th of April the Amber Rose shared a photo where she was wearing a long red wig.

The 31-year-old ex wife of 27 yr old rapper Wiz Khalifa, showed off her new look in a steamy Instagram candid. The model caption read, ‘U like?’

Scroll down for video Whats new:  Amber Rose shared a photo earlier this week where she had long red hair; the caption read, ‘U like?’

Thursday morning the serien shared a Throwback capture on Instagram which shows her at age 18.

With her head shaved for the very first time, this photo was taken when she was working as a stripper.

Captioning the pic ‘#tbt Muva at 18 years old when I first cut my hair :-)’, a young Amber is seen dressed in a white tanktop, with pink lip balm and no tattoos. TBT: Amber Rose has shared a photo with her Instagram followers of herself with a buzz cut at aged 18 the first time she ever shaved her head.

Since then the model has kept various color chages but most notable the dyed peroxide blonde look which is her signature, and while she’s confident nowadays, that wasn’t always the cases for the the Philly native she previously metioned how she was in tears after first shaving off her hair.

In 2012 she spoke to the New York Post and told them that one day in her late teens she just decided to make a dramatic change: ‘After I shaved, it I cried for a few days, until I realized it looked dope.

‘Sinead O’Connor was a bald-headed bad-a**, and I loved her,’ she explained.

Amber known as Paris in those days was  an under age stripper living in a housing project in The Bronx.

The video model started working  in strip clubs at the tender age of 15, behind her parents’ backs to take care of her family. Few years after her distinctive look caught the eye of ex boyfriend Kanye West who helped propel her to fame as a urban model. Even though she spoke of crying the first time her hair was cut after 15 some odds years later the model says she grabs the razor weekly, declaring: ‘I don’t even know how girls deal with hair.’

While she has a serious passion for fashion , Amber denied the rumours that she’s in talks to join E! show Fashion Police she says that the rumors simply aren’t true.

She spoke openly on reality star Kandi Burruss show Kandi Koated Nights this week, and declared: ‘No that is not true. No-one has reached out to me. Who am I to critique anyone?’

‘It’s not my type of show. I need to do what I’m comfortable with.’ she concluded. Famous Friends: Amber’s distinctive and astonishing look has given her worldwide fame, with the star joining forces with the likes of Paris Hilton to attend the celeb-packed Coachella music festival.
Related ItemsAmber RosemodelModelsvideo vixen