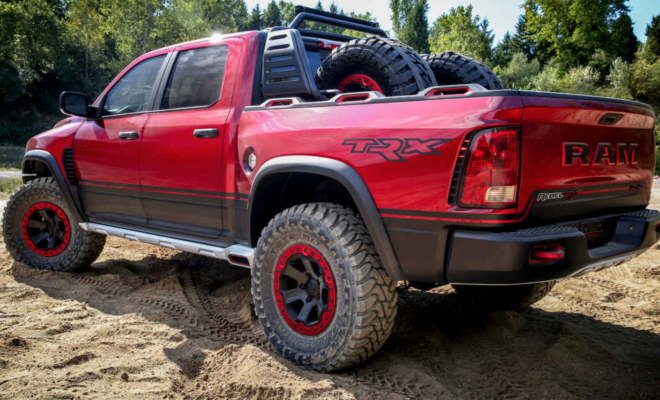 The Ram Rebel Trx Is A 100-mph Off-road Beast

The Rebel TRX boasts itself at the Texas State Fair from September 30th to October 23rd with a 575-horsepower supercharged 6.2-liter Hemi V8 with lifted suspension, and eight speed automatic transmission.

Appearance-wise, it borrows concepts from the Power Wagon for it’s hood, grille, and tailgate, and borrows from the Heavy-Duty truck line for added masculinity.

Completely altering the truck, the concept’s axles are 6 inches wider which required wider wheels and an even wider-yet fender to cover it’s huge carry-ons. To brake a truck this size, that can reach the triple digits, enormous six-piston Baer racing brake calipers are installed.

With the ability to tread 100mph in rough terrains, Ram executives are rallied up for this project with high hopes in making it a production model.

But the 37-inch tires rolling on the 18-inch beadlock wheels and riding on lifted suspension really change the truck’s stance. The concept’s axles are six inches wider, with wider wheels mounted on each end, so big flares were needed on the fenders to cover the Ram’s big rolling stock.

Supercharged 575 horsepower and a suspension system built to withstand constant hammering, the Rebel TRX concept swallow the toughest terrain at over than 100 miles per hour,” reported head of Ram brand Mike Manley.