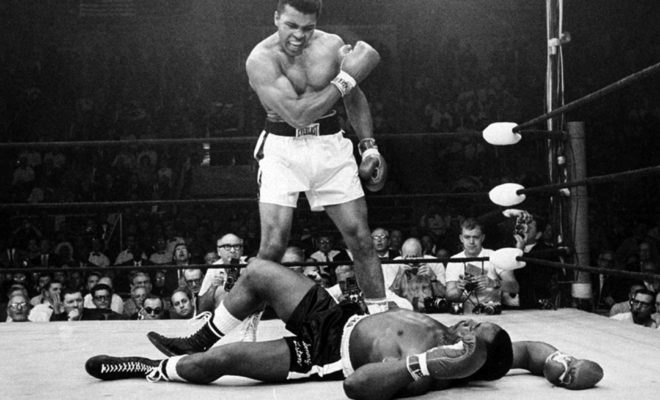 MUHAMMAD ALI, THE GREATEST BOXER OF ALL TIME, DIES AT AGE 74

Muhammad Ali age 74 was pronounced dead on Friday at a Phoenix-area hospital, where he had  been treated for respiratory complications.

Let’s take a glimpse back in time at his most famous fight.

In the acclaimed international newspaper the Scotsman ….the ferocity of Ali Roar captured in text ont hat very night it was reported that  while his prey prone before him, this looks like Muhammad Ali at his iconic best – showing his strength, demonstrating his superiority, being ‘The Greatest’.

The Scotsman went on to write

In actual fact this picture was preceded by one of the most contentious blows in boxing history. Even 50 years later the debate rumbles on, with witnesses from both side contradicting each other’s version of events.

Did Ali catch Sonny Liston with a punch so perfectly timed that even a blow so innocuous could send a former heavyweight champion sprawling to the mat? Or did Liston take a dive less than two minutes into a rematch having already surrendered his crown in the first bout between the pair?

Ali’s face looks like a man who’s just given his all to deliver a knockout blow, in the same manner any sportsman would contort their facial features at the point of impact, summoning as much strength as humanly possible. In actuality, Ali is berating his challenger. He wanted Liston to get up. Even the champ didn’t believe the punch had been enough to send such a behemoth to the mat. Earlier in his career, Liston once went an additional four rounds after having his jaw broken by an opposing fighter, and yet here he was, so soon after refusing to come out of his corner to contest his title in Ali-Liston I, succumbing to defeat so readily once again.

Ali would later talk up the punch and many agreed that while it may have looked unexceptionable, the circumstances made it possible for it to be fair and decisive. Liston had just thrown a left jab when Ali countered with the right hook. Footage from the fight shows that Liston had lunged too far and couldn’t see Ali’s approaching glove. Those who defend boxing’s integrity believe Liston was stunned by a blow he never saw coming.

Many didn’t think it plausible the boxer dubbed ‘The Big Bear’ would’ve been taken down by this kind of counter move, but then Liston’s training for the rematch were dogged by rumours of alcoholism and the former champion being unable to reach peak fitness. Perhaps these factors had combined with Ali’s legendary quickness to make the perfect storm needed for the ‘phantom punch’ to be possible.

Those in attendance certainly didn’t consider such a scenario as they chanted ‘fix’ and booed the outcome of the fight, which took on an even stranger turn when Liston got to his feet and the two looked to resume their duties before the referee stopped the match, insisting Liston had been counted out.

Unpopular with the American public, Liston was given the respect he felt he deserved in the company of Las Vegas mobsters. Many saw this connection as more than enough evidence to presume Liston had not only thrown this fight, but also the first duel when he refused to leave his corner for the beginning of the seventh round. Liston’s widow Geraldine always refuted such claims, saying that if Sonny had ever received anything for intentionally losing the contests, he never displayed his ill-gotten wealth.

For Ali the victory cemented his place as champion, having proven (to those who didn’t doubt the authenticity, at least) that his first victory over Liston hadn’t been a fluke. The loudmouth upstart who hadn’t long joined the controversial Nation of Islam had yet to win over the American public, but that time would come as he went on to enjoy one of the most legendary careers in all of sports history.

Liston, on the other hand, would never again fight for a world title. He died in 1970, at the age of 38, from a suspected heroin overdose.

• The iconic shot was taken by John Rooney, who was more than a little unlucky that his picture was eventually usurped by one belonging to a fellow photographer. Standing right beside Rooney on the night was Neil Leifer. The latter snapped an almost identical image in colour. Partly because of this reason it grew to be the more celebrated of the two, even though Rooney’s was the one which dominated the news stands the next day. Nowadays many people mistake it for a black and white, cropped version of Leifer’s.

Pattycakez Staff
← Previous Story A Sit Down With Sonya Curry On Raising Her MVP Son Stephen Curry
Next Story → Get Her Some Water ? We Got the Run Down on Steph Curry’s Thirstiest Fan, Roni Rose !