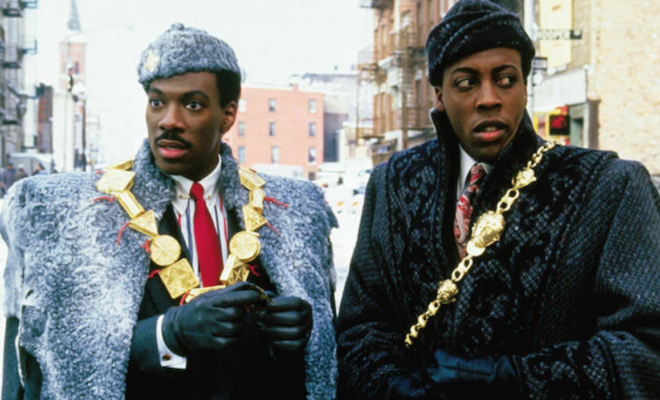 Today In 1988, “Coming To America” Was Released In Theaters. So to celebrate we’re listing off 10 little known easter eggs about the iconic movie starring Eddie Murphy

Is there an Eddie Murphy role that isn’t memorable? Hell, even Norbit was nominated an Oscar. From Buckwheat on Saturday Night Live to Dr. Doolittle, the veteran comedian has embodied some of the most beloved characters to ever hit the screen. Not the least of which is Coming to America’s Prince Akeem. As an African prince who relocates to Queens, New York to find the perfect woman to hold down the throne, Murphy’s hilarious performance(s) turned a silly little film into a certified comedy classic.

1. PAULA ABDUL CHOREOGRAPHED THE OPENING DANCE SCENE AT THE PALACE IN ZAMUNDA.

In an interview with Rolling Stone, the Laker Girl-turned-pop star listed her Coming to Americascene as one of the top moments of her choreography career. “This was one of my moments of having to really prove myself, because I was still pretty new in my career as a choreographer,” Abdul said. “John Landis, the director, wanted the person that choreographed Janet Jackson. I was still a Laker Girl. “I went in and he looked at me and said, ‘What are you, a teenager?’ And I said, ‘Yes, I am!’ He basically was telling me, ‘What do you know about African dancing?’ And this is my whole thing when becoming a choreographer: ‘I’ll just tell everyone yes, I know exactly what I’m doing, and then I’ll figure it out later.’”

2. THE NAME “ZAMUNDA” IS AN ALTERED VERSION OF A FAMOUS WRITER’S NAME.

As noted in the DVD commentary of the film, screenwriters Barry Blaustein and David Sheffield named the kingdom of “Zamunda” after Bob Zmuda, Andy Kaufman’s writing partner and close friend.

Despite working together previously on Trading Places, director John Landis and Murphy had a less than amiable professional relationship. “On Coming to America, we clashed quite a bit because he was such a pig; he was so rude to people,” Landis told Collider. “We had a good working relationship, but our personal relationship changed because he just felt that he was a superstar and that everyone had to kiss his ass. He was a jerk. But great—in fact, one of the greatest performances he’s ever given.”

4. IN 1989, CBS FILMED A PILOT FOR A TV VERSION OF THE MOVIE, STARRING TOMMY DAVIDSON.

However, according to a report by Fusion, it never aired because it was “terrible.” Other cast members included Paul Bates and John Hancock.

5. MCDOWELL’S WAS ACTUALLY A WENDY’S IN QUEENS.

The real-life location of the McDowell’s is along Queens Boulevard, where a Wendy’s used to be located (it’s since been demolished). In fact, McDowell’s even has its own Yelp page.

6. TOBE HOOPER MAKES A CAMEO AT THE MCDOWELLS’ PARTY.

According to IMDb, his character is known as “Boy Getting Haircut” in the famous barbershop scene.

The duo must’ve truly impressed Disney, because the on-screen couple landed the coveted gig of voicing Mufasa and Sarabi, respectively, in the 1994 animated masterpiece.

As a tribute to Landis’ Trading Places (1983), the movie that put Murphy on the map, Don Ameche and Ralph Bellamy reprised their Trading Places characters for Coming to America.

10. THE FILM PAYS TRIBUTES TO ROOTS WITH A “KUNTE KINTE” REFERENCE.

In the barbershop scene, the Jewish man calls Akeem “Kunta Kinte,” a reference to Roots. In fact, John Amos, the actor who starred in Coming to America as Lisa’s father Cleo, played Kunta Kinte in the groundbreaking 1977 miniseries.

Drop some of your favorite lines In the comments below

Brought to you by mentalfloss.com

Pattycakez Staff
← Previous Story CHECK OUT ALL OF THE HOTTEST WOMEN OF THE 2016 BET AWARDS
Next Story → Marvel Comics Just Unveiled Their New Iron Man, And She’s An African America Woman