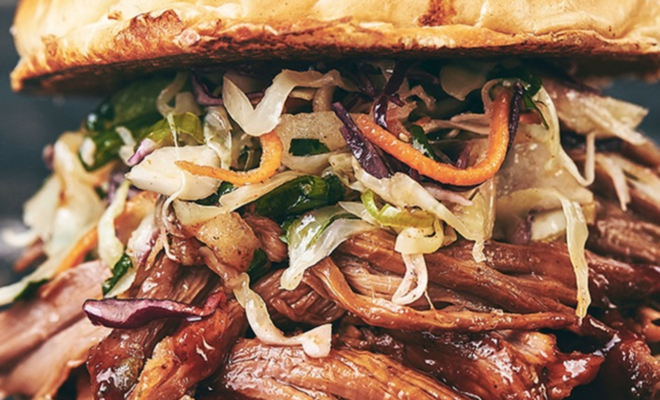 HOW TO MAKE THE GREATEST PULLED PORK SANDWICH THAT EVER EXISTED

Recipe were adapted from Red’s True BBQ debut cookbook ‘Let There Be Meat’ available to purchase at all major bookstores. Discover the taste of true barbecue at home – Red’s True BBQ new heavenly range of rubs and sauces that can be made from all that leftover July 4th food.

HOW TO MAKE THE GREATEST PULLED PORK SANDWICH THAT EVER EXISTED

“We pride ourselves on our truly low and slow Pulled Pork. It has won many first prizes at BBQ competitions, so is it any wonder then that we sell these sandwiches in the thousands in our restaurants, at festivals and at our pop-up food stalls across the UK?”

“The combination of smoky, sweet and spicy pulled pork and BBQ sauce, the sharp tanginess of our dressed slaw, all sitting pretty in a soft bun turns a sandwich into an epic mouth party. For best results, serve straight away while the pulled pork is still warm”.

Mix all the ingredients together and taste, adjusting the sweet and sour levels to your preference. Season with salt and pepper once fully mixed. Don’t make it too salty though, as you’ll be seasoning the sandwiches with some rub just before serving.

Make the dressing by whisking the sugar, mustard and vinegar together in a mixing bowl or jug.Slowly drizzle the oil into the bowl and whisk vigorously to combine all the ingredients.

Slice all your veg ingredients in a food processor using the finest blade and then dress the slaw.

Bring it all together:

01
Gently toast the buns over hot coals on your BBQ, or in the kitchen using a toaster or grill. Be careful not to burn them: a good char mark will add a level of flavour to the sandwich, but lightly toasted on the sliced side is what we are aiming for.

02
Arrange all the bun bottoms in three rows of five. Arrange the tops on a separate area of your work surface, in the same order as the bottoms, to ensure each bottom is matched with its correct top when assembling the sandwiches. You want to build them as quickly as possible so the buns don’t go soggy.

03
Drizzle the Kansas City BBQ Mopping Sauce into the prepared, hot pulled pork and mix well. This sauce helps to keep the pork moist while cutting through the fats in the meat. Use a metal spoon if the pork is too hot to use your hands.

04
Scoop up a portion (about 200g) of pulled pork using a large slotted spoon and squeeze the liquid out of the meat. Add the meat to the bottom half of a toasted bun. Sprinkle a good pinch of Red’s Pulled Pork rub on top. Using another slotted spoon, take a level spoonful of the slaw and gently squeeze it to remove any excess dressing. Place this on top of the pulled pork. Do this as quickly as possible because the cold slaw will cause the pork to cool.

05
Finish the sandwich by topping with a level tablespoon of Kansas City BBQ Sauce and a few pork cracklings.

06
Place the bun tops on sandwiches at a slant to reveal all the glorious fillings. Present on a serving platter, or plate individually if you prefer.

Recipe adapted from Red’s True BBQ debut cookbook ‘Let There Be Meat’ available to buy at all major bookstores. Discover the taste of true barbecue at home – Red’s True BBQ new heavenly range of rubs and sauces can be found in the condiment aisle at Asda from July 4th.