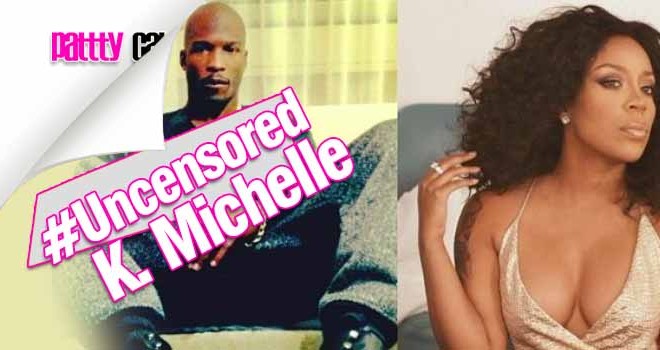 K. Michelle unscripted: she says Ochocinco’s penis was too big to fit in her Box!!

R&B songstress and reality star, K. Michelle sat down with Necole Bitchie for an interview where she discussed her relationships including how she wasn’t letting Ochocinco’s python swim in her! Hmm, give it to us blunt, K!

“His penis is so big Necole, I would not let him have sex with me. Because I did not want him to stretch my walls out because I need them. I need them. I looked at this penis and I said you know what, uh uh. I’m not- that thing is unreal. I can’t. I can’t take that.”

In addition to his intimidating size, K. Michelle says the timing simply wasn’t right, as they were both on the rebound from previous public relationships.

“He’s a cool, nice guy, he still is funny. But between that, I was not screwing him with that penis. And then on top of that, I just feel like he has his own healing and stuff to do. And I was going through my healing of situations and things like that. And it was right after Evelyn [Lozada]. So it wasn’t time for that. And she blocked me on Twitter. I love Evelyn. I’m like, ‘I ain’t got nothing to do with this Evelyn, I really like you.’ So you can unblock me Evelyn, I really do like you!”

When it comes to J.R. Smith, her words weren’t as kind.

“J.R. has his own mental issues and he started to take advantage of my kindness because you know, when a man knows he got you and you’re fighting for him, that’s when they clown…what I don’t like about J.R. now is that, he can be in the same room with me and he’ll tell other players and stuff, ‘Oh my god, I gotta move because she’s going to be tryna bother me.’ Boy, don’t nobody want you! And the players you’re telling are actually really close to me so they’re laughing at you J.R. I don’t want you. Your girlfriend, whatever she is, please, she don’t have to call me no more!!!”

She also spoke on ex-boyfriend Lance Stephenson, saying they are still good friends and that she loved his sense of humor and dedication to his craft.

“Me and him are really getting to be friends. I think I rushed him into a relationship he wasn’t ready for. And now that I don’t rush him, now that we can just talk as friends- we can breathe. And we’re breathing as friends right now…he’s so funny. I love his dedication to his craft. All these athletes do stuff and that man doesn’t smoke, he doesn’t really drink, he gets up every morning no matter what and works out and that’s sexy to me. Someone who is that is into their craft and take it serious –that’s sexy. And I love his smooth skin. He’s really a great friend of mine. Never thought I would say that, but he is really a great friend of mine right now.”

Gypsy Long
← Previous Story TBT: Melyssa Ford List her top 3 Things for Great Sex”
Next Story → Do it for the Vine! Can your Teacher do this?? Sexy Teacher now earning six-figure income from twerking!!!