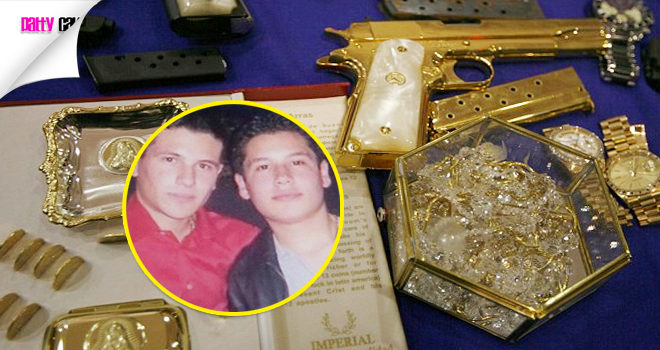 Inside Look At The Luxurious Flamboyant , Violent Lives Of El Chapo’s Sons 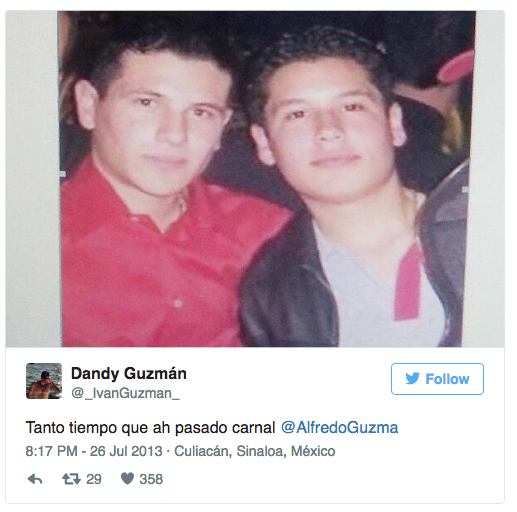 After being  arrested in February, Joaquin “El Chapo” Guzman, notoriously known for being a recluse and rarely ever photographed, the leader of Mexico’s Sinaloa Cartel had little bling around him. Although his estimated wealth was $1 billion, the monthly rent on his spare Spartan Mazatlan apartment was just $1,200, and its kitchen appeared stocked piled with only a blue bin of vegetables.

His sons Alfredo and Ivan Guzman have been substantially less modest. 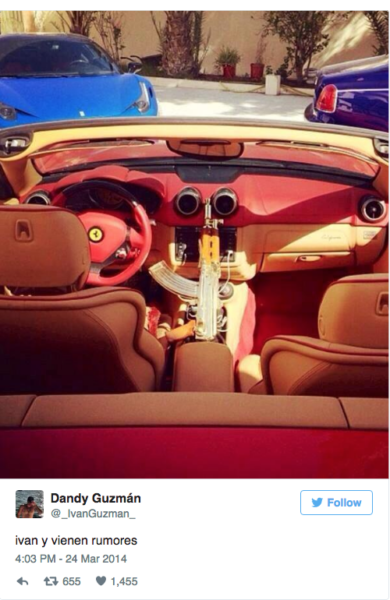 Contrastly, the newer generation of El Chapo’s sons and some of the younger henchmen glorify the cartel life of violence, wealth and general insanity, posting snapshot after snapshot for tens of thousands of fans.

Pattycakez® could’nt confirm the authenticity of these social media accounts, however those operating@AlfreditoGuzman and @_IvanGuzman_ frequently refer to their father, El Chapo. “You search for my dad but he’s at ease right in front of you all and you don’t even realize,” Alfredo tweeted in 2013.

What’s more interesting, is that they’ve posted pictures of a man who appears to be El Chapo, in addition to gang warfare, racks of 1000s dollar bricks of cash, many scantily clad women, and small airplanes harboring drugs. Talk about a cartel leaving nothing to the imagaination.

If the accounts are credible, the photos suggest suggest a new generation of drug kingpins have discarded some of the stagnant belief that once governed mafias and drug cartels operate off of discretion, anonymity, key to their omertà rather than the  affluent, flamboyance and celebrity approach .

Especially not when they have fleets of Mercedes, Ferraris and Lamborghinis. Which are sometimes filled with gold guns and tiger cubs. 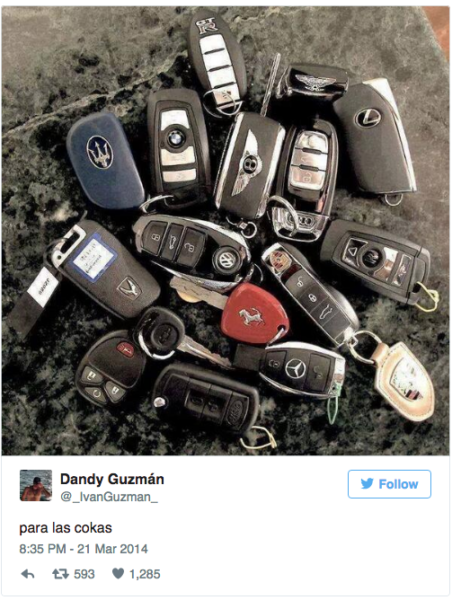 According to the Latin Times, both Ivan and Alfredo are children from El Chapo’s first marriage who followed their father into the drug business. Referred to as “El Chapito,” Ivan was arrested in 2005 on money laundering charges, but was released three years later after a judge ruled there wasn’t any proof the cash was drug money — and that it wasn’t illegal to be the son of an infamous drug lord.

Authorities suspect Alfredo, meanwhile, has taken on a powerful role in the drug empire. He “was coordinating the majority of the drug shipments sent to the United States by the Sinaloa cartel, including cocaine and heroin,” a U.S. Navy spokesman said in 2012. He added Alfredo “was taking increasing control of Sinaloa cartel operations.”

With much ballyhoo, Mexican authorities announced they’d arrested Alfredo in 2012, and images of a scruffy, chubby kid were beamed across the world. But days later, it turned out they’d arrested the wrong guy.

The cops were, however, bearing down on Jose Rodrigo Arechiga Gamboa — “El Chino Antrax” — one of the most feared strongmen in the Mexican underworld. Arrested earlier this year, the musclebound enforcer really liked working out, eating protein, gold guns, and various filters, as seen in his apparent Instagram feed.