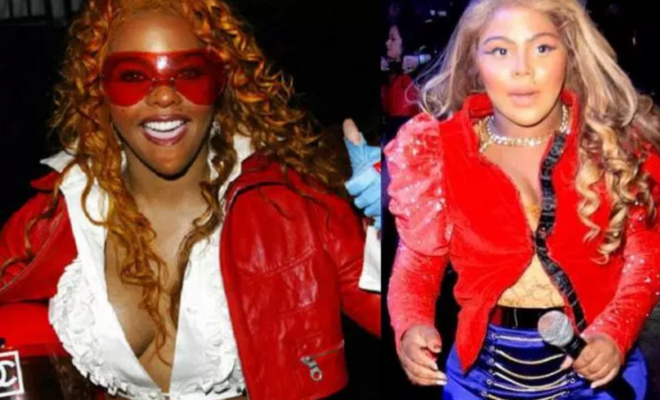 Double Take: Bruh?! Lil Kim Had Us Like What… After Posting New LIght Skin Selfies That Look Nothing Like Her

What happened to the old Lil Kim? After she posted a series of selfies onto her Instagram on Sunday fans were disappointed to see that she looked nothing like herself. She no longer looks like the beautiful black woman that we met with a sassy attitude. In her selfies she has lighter skin, blonde hair and can pass for a white woman. These selfies lead people to believe that she has either got plastic surgery done, bleached her skin, changed her appearance with makeup, or used Photoshop.

Lil Kim has admitted to getting work done on her nose in her interview with radio personality, Angie Martinez in 2005. Over the years her appearance has changed drastically and has everyone wondering what happened to her. People have spoken out all over social media trying to get to the bottom of where things might have gone wrong. Some ridiculed her for setting a bad example to black women and other support her despite her drastic transformation.

Of Course the Queen B was unapologetic and posted a classic photo of her and the late Biggie Smalls with this caption “I was gonna post this pic for #SuckADickSaturday ‼️ but #SuckADickSunday ‼️ will have to do! Happy Sunday! Me and my bitch @cnvshaka the Gabbana Girls.

I was gonna post this pic for #SuckADickSaturday ‼️ but #SuckADickSunday ‼️ will have to do! Happy Sunday! Me and my bitch @cnvshaka the Gabbana Girls.

Pattycakez Staff
← Previous Story Prince The Legendary Music Icon Has Died At 57
Next Story → 99 Problems: The Beyhive Is Not Having It, Rumored Side Chick Rachel Roy Is Under Fire !!!